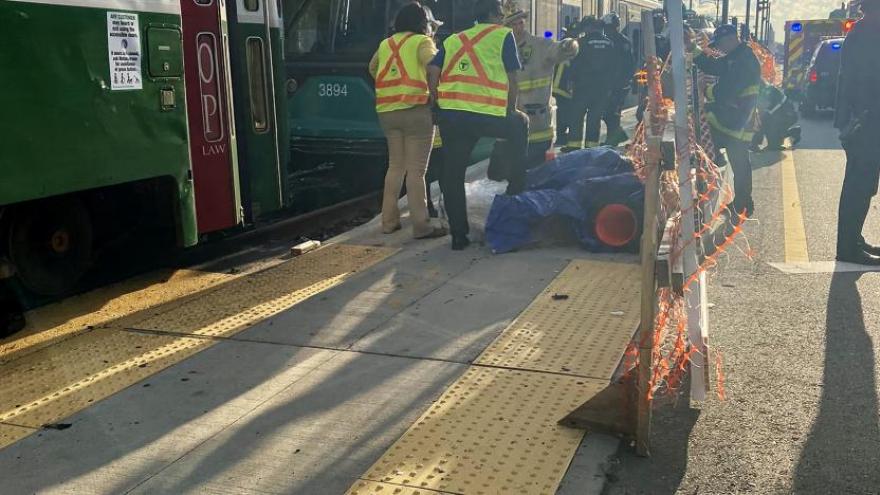 Multiple people were reported injured after the Massachusetts Bay Transport Authority said two trains collided with one another on the Commonwealth Avenue rail line in Boston.

(CNN) -- Multiple people were reported injured Friday after the Massachusetts Bay Transport Authority said two trains collided with one another on the Commonwealth Avenue rail line in Boston.

Twenty-three people have been transported to hospitals for injuries that are not life-threatening after the accident Friday evening, according to a tweet from the Boston Fire Department.

"Based on information developed as part of the investigation, one of the Green Line operators involved in last night's collision has been placed on administrative leave," MBTA spokesperson Lisa Battison told CNN on Saturday.

The authority said the collision involved two Green Line trains on the B Branch near Babcock Street.

"We take this matter extremely seriously and are actively investigating the incident to understand what occurred, and prevent it from happening again," the MBTA said in a tweet.

"The train was stopped at the light when it suddenly jerked forward," passenger Brian Sirman, who was on one of the trains, told CNN affiliate WCVB. "It felt like the worst amusement park ride that you could imagine, just jerking you forward."

A witness who was sitting in a car when the crash happened told CNN affiliate WBZ that some passengers appeared to have neck and head injuries.

"So there was a woman that was coming off the train, and she had a lot of blood coming down her face," the witness said. "I had napkins, so I gave her some napkins."