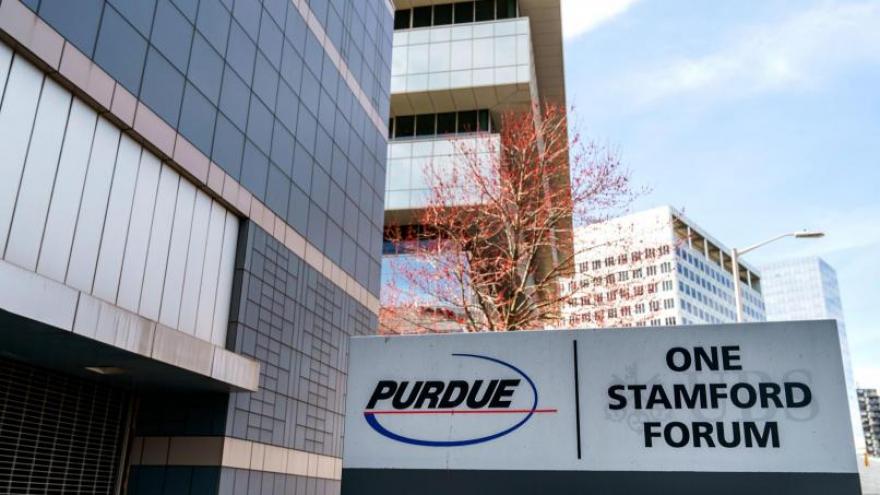 Purdue Pharma headquarters stands in downtown Stamford, April 2, 2019 in Stamford, Connecticut. Purdue Pharma, the maker of OxyContin, and its owners, the Sackler family, are facing hundreds of lawsuits across the country for the company's alleged role in the opioid epidemic that has killed more than 200,000 Americans over the past 20 years

(CNN) -- Opioid manufacturers have cost the American economy $2.15 trillion, according to a notice of claim filed in bankruptcy court by nearly every US state and many territories.

The filing was made Monday by New York, 48 other states, Washington, DC, and various other territories against Purdue Pharma and other distributors and manufacturers, according to the New York attorney general. A financial breakdown per state provided in the court filing shows that New York is seeking to claim $165 billion.

An official with knowledge of the filing acknowledges it is not likely anyone will recoup this high dollar figure.

Purdue Pharma, the maker of the painkiller OxyContin, filed for bankruptcy in September as part of its plan to settle litigation over the opioid crisis, which is fueled by both illicit and prescription drugs. An estimated 10.3 million Americans aged 12 and older misused opioids in 2018, including 9.9 million prescription pain reliever abusers and 808,000 heroin users.

Purdue has repeatedly denied any wrongdoing and said in response to the filing that the claims were expected.

"On July 30, Purdue successfully concluded one of the most extensive noticing campaigns in chapter 11 history," Michele Sharp, executive director of media relations for Purdue Pharma, said in a statement. "Purdue continues its work to emerge from bankruptcy, garner additional support for the proposed settlement, and implement a final resolution. The proposed settlement would deliver more than $10 billion in value, including 100% of Purdue's assets, to claimants and communities, and would address the opioid crisis by providing needed funds, as well as millions of doses of lifesaving opioid addiction treatment and overdose reversal medicines."

As part of the court filing, states cited US Centers for Disease Control and Prevention opioid death data from 1999-2018. New York saw 3,050 deaths in 2018. Death figures were adjusted to reflect a CDC formula due to various reasons of underreported opioid deaths according to the official.

New York's lawsuit against all opioid manufacturers and distributors was set to get underway in April, but was postponed due to coronavirus. Purdue was previously a defendant in the suit, but because it filed for bankruptcy, the claim was moved to bankruptcy court.

Oklahoma is not included in the $2.15 trillion claim because of its previous settlement with several companies.