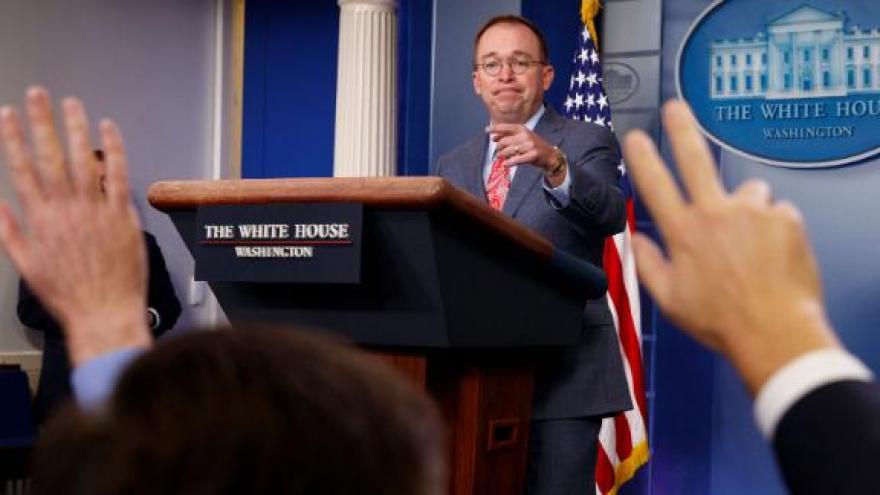 (CNN) -- Acting White House chief of staff Mick Mulvaney on Sunday aggressively denied that he admitted last week a quid pro quo between President Donald Trump and Ukraine, saying again that he was misunderstood and that no such agreement occurred.

During a White House press conference on Thursday afternoon, Mulvaney said Trump held up an aid package to Ukraine in exchange for an investigation into an unsubstantiated theory that Ukraine, not Russia, was responsible for hacking Democratic Party emails in 2016. On Thursday evening, Mulvaney attempted to claim that he did not admit to the quid pro quo despite clearly being asked if the Trump administration withheld funding for Ukraine for an investigation into the DNC server and answering affirmatively.

On "Fox News Sunday," Chris Wallace pressed the aide on the remarks, asking why he initially said that "aid to Ukraine depended upon investigating the Democrats."

"OK that's not what I said, that's what people said I said," Mulvaney said. "There were two reasons that we held up the aid, we've talked about this at some length -- the first one was the rampant corruption in Ukraine ... the President was also concerned about whether or not other nations, specifically European nations, were helping with foreign aid to Ukraine as well."

He continued: "I did then mention that in the past the President had mentioned to me, from time to time, about the DNC server, he's mentioned the DNC server to other people publicly, he even mentioned it to President (Volodymyr) Zelensky in the phone call -- but it wasn't connected to the aid and that's where I think people got side tracked this weekend at the press conference."

Wallace argued that "anyone listening to what (Mulvaney) said in that briefing could come to only one conclusion," and played two clips from Thursday's televised appearance.

"Reporters will use their language all the time (but) my language never said quid pro quo," Mulvaney said.

"Can I see how people took that the wrong way? Absolutely. But I never said it was a quid pro because there isn't," Mulvaney said.

During last week's news conference, Mulvaney insisted he knew only of a US request to investigate the handling of a DNC server hacked in the 2016 election, but text messages between US diplomats show efforts to get Ukraine to commit to an investigation into Burisma, the company on whose board former Vice President Joe Biden's son Hunter sat. There is no evidence of wrongdoing in Ukraine by either Biden.

Mulvaney's admission came after current and former administration officials revealed in congressional testimony that a White House meeting between Trump and Zelensky was also being conditioned on Ukraine launching politically charged investigations.