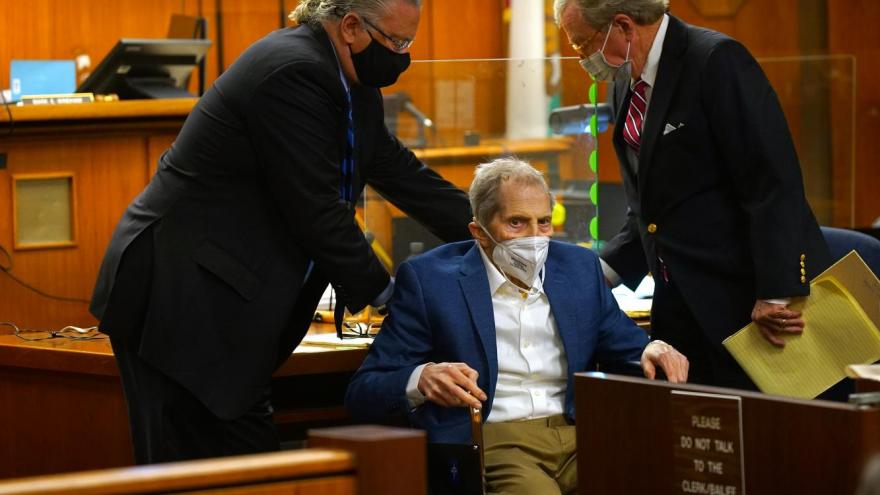 (CNN) -- More than six years after a crime documentary triggered a murder charge against real estate scion Robert Durst, a jury in Los Angeles on Tuesday began deliberating the fate of the eccentric Manhattan millionaire.

Durst is charged with the first-degree murder of his close friend and confidante, Susan Berman, in 2000, at her Beverly Hills home, hours before she was set to talk to investigators about the mysterious disappearance of his first wife, Kathleen McCormack Durst, who was last seen in 1982.

The defendant sat in a wheelchair, wearing a baggy gray blazer and white shirt, as closing arguments ended and Judge Mark Windham sent the panel to the jury room. The nine women and three men began deliberations just after noon local time.

Durst, 78, took the stand in his defense during the sensational trial in Los Angeles County Superior Court. He denied killing Berman and said he found her on the floor of her bedroom with a fatal gunshot to the back of the head.

In closing arguments, prosecutor Habib Balian told jurors the case was simple: Berman knew Durst had killed his wife and helped him cover it up, according to the prosecutor.

Balian pointed to one of the state's strongest witnesses, a longtime friend of both Durst and Berman, Nick Chavin, who testified the defendant had told him, "It was her or me," referring to Berman. "I had no choice."

McCormack Durst was declared legally dead in 2017. Her body has not been found and no one has been charged in that case.

Attorney Dick DeGuerin, in closing, portrayed his client as an ailing and hapless old man vilified by prosecutors whose case was circumstantial at best.

"If you come to two or more reasonable conclusions about where the circumstantial evidence leads you, you have to say 'not guilty,' " DeGuerin said.

He added, "If you are, as you must be, still asking yourself, 'What happened to Kathie? Where? When? How?' Then that's reasonable doubt. You can't guess. You have to be convinced beyond a reasonable doubt."

DeGuerin told jurors they were not expected to like or even believe Durst -- whose cross examination exposed multiple lies he made over the years -- but being a liar did not make him a killer.

"I think that you can see from Bob Durst's 14 days on the witness stand that his compass doesn't point north," DeGuerin said. "He's unusual. And I don't think you need a psychiatrist to tell you that."

Prosecutors allege that Durst shot Berman in the head to stop her from incriminating him in the disappearance of his first wife, Kathleen, in 1982. They say Durst confided to Berman that he had killed Kathleen, and that she helped him cover his tracks.

Lead prosecutor John Lewin, a cold-case specialist from the Los Angeles County District Attorney's Office, argued loudly and, at times, mockingly with Durst during his testimony.

On the stand Durst denied murdering his first wife and, later, Berman. But under cross examination, Durst testified that he would perjure himself if he had killed them.

"Did you kill Susan Berman?" Lewin asked Durst, who sat sunken in his wheelchair a few feet away.

"No," Durst countered in a weak but emphatic voice.

"But if you had, you'd lie about it, correct?" asked Lewin.

Lewin prompted Durst to admit he perjured himself five times during the trial, which resumed in May after a 14-month delay due to the pandemic.

Durst's testimony spanned three weeks, with much of the cross examination devolving into contentious sparring with Lewin.

Lewin and Durst first squared off in a New Orleans jail cell in 2015 after Durst agreed to an interview that would last three hours, without his lawyers present, making potentially damaging claims and lamenting his many physical ailments.

There was little physical evidence in Berman's unsolved death. There were no eyewitnesses and no murder weapon.

One key piece of evidence was the so-called "cadaver" note, a cryptic letter sent to police with Berman's address and the word "cadaver" in caps that led detectives to her body.

In the 2015 HBO documentary "The Jinx," Durst said the letter could have been sent only by Berman's killer. Defense lawyers had previously denied Durst wrote the note, and they unsuccessfully tried to exclude from trial handwriting evidence about it.

Filmmakers confronted Durst with another letter he once mailed Berman, with nearly identical handwriting to the "cadaver" note. In both, Beverly Hills was misspelled as "BEVERLEY.

In a court filing, lawyers for the real estate mogul late last year reversed course and acknowledged that Durst penned the anonymous note. "This does not change the fact that Bob Durst did not kill Susan Berman," DeGuerin said at the time.

He's been acquitted of murder before

Durst's decision to take the stand at his own murder trial had worked for him in a previous case.

In 2003, Durst testified in Texas that he had fatally shot a neighbor, Morris Black, in self-defense and admitted he cut up his body with surgical precision and dumped it in Galveston Bay. He said he did so in a panic, while prosecutors maintained he wanted to steal the man's identity and escape the investigation of his wife's disappearance.

The jury in Texas, which heard how Durst posed as a mute woman as he hid out in Galveston, accepted his self-defense assertion and acquitted him of murder.

Durst's second murder trial is one more chapter in an unusual life that reached mass audiences through "The Jinx" miniseries.

He was arrested in New Orleans the night before the airing of the final episode of the show. In its final moments, Durst went into the bathroom, apparently not realizing his mic was still on, and made a series of comments that became infamous.

"What the hell did I do? Killed them all, of course," he said in what was widely interpreted by viewers as a confession. But transcripts of the audio recording in court revealed that the quotes were spliced and edited to be in a different order and context, The New York Times has reported. Durst has said he was "high on meth" during the taping of the documentary.

Durst's health has deteriorated since the documentary. He is thin and hunched over and speaks in a whispery voice. Durst has bladder cancer and has undergone multiple surgeries, including the insertion of a shunt in his head to relieve pressure on his brain.

Durst has long maintained he had nothing to do with his wife's disappearance.

McCormack Durst was on her way to medical school in New York when she vanished in 1982. Prosecutors said her disappearance was preceded by marital problems and physical abuse by Durst.