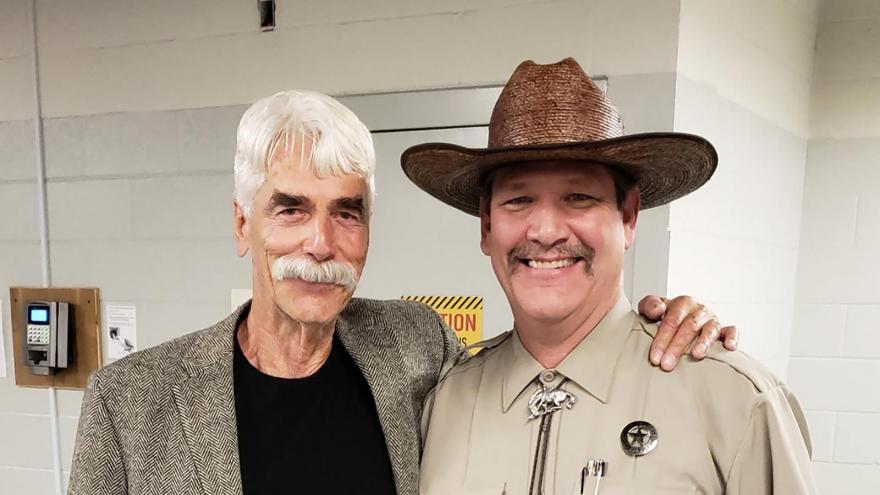 Tim, right, has become an internet favorite after he was put in charge of a museum's social media accounts. He is photographed here with actor Sam Elliot and Elliot's "quality mustache."

(CNN) -- A new internet icon has emerged and his name is Tim.

As the head of security at the National Cowboy and Western Heritage Museum in Oklahoma City, Tim takes his responsibility of protecting the museum and its collection seriously.

But with the museum closed to the public and other employees working from home to prevent the spread of the coronavirus, Tim was given an additional duty of managing the museum's social media accounts.

In Tim's "content" that he posts daily, he takes followers on a tour through the empty museum, showing off cool artifacts like the hat and eye patch John Wayne wore in "True Grit," the 1969 film in which Wayne won his only Academy Award for his portrayal of US Marshal Rooster Cogburn.

While definitely interesting, his followers seem to be getting a kick out of his posts for a completely different reason -- his dad jokes and wholesome attempts at figuring out social media.

From writing out "hashtag" to ending each post with "Thanks, Tim," he isn't what you'd call social media savvy, but that's why people are loving him.

"I love this man omg thank you for this wholesome content I'm staying inside for people like you #HashtagThanksTim," another commented.

CNN has reached out to the museum, both through its Twitter account and its listed phone number -- and is waiting to hear back.
Let's just hope that once the coronavirus crisis ends, the museum will let Tim keep tweeting.