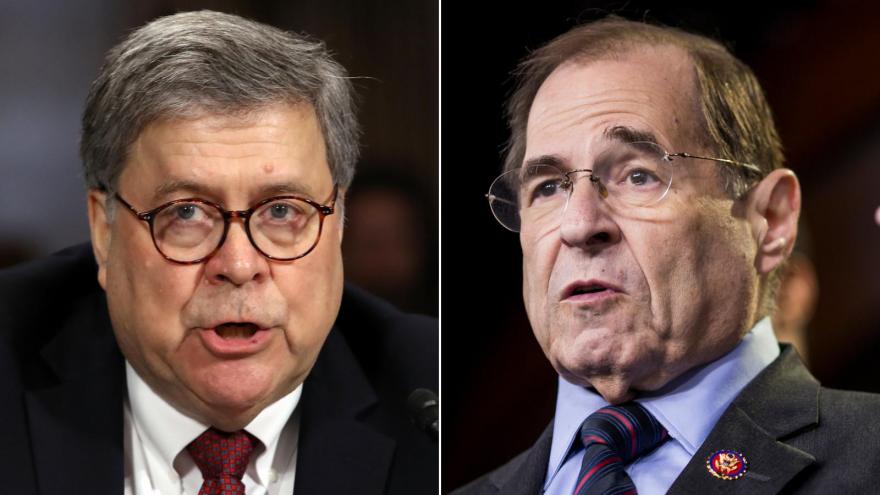 House Judiciary Chairman Jerry Nadler is requesting the Justice Department provide information and access to 15 individuals currently or previously employed by the DOJ who were connected to the prosecution of Roger Stone, a longtime confidant of President Donald Trump and other politically sensitive cases.

(CNN) -- House Judiciary Chairman Jerry Nadler is requesting the Justice Department provide information and access to 15 individuals currently or previously employed by the DOJ who were connected to the prosecution of Roger Stone, a longtime confidant of President Donald Trump and other politically sensitive cases.

In a letter to Attorney General William Barr sent on Friday, Nadler is seeking to investigate whether these people have any knowledge about whether there was improper political intervention in either the Stone case or other cases of interest to Trump. The requests come as the Democrat-led committee prepares for Barr to testify before it on March 31.

"I write in advance of our March 31 oversight hearing in order to request information concerning improper political interference, including by President Trump, in enforcement matters handled by the Department of Justice," Nadler writes in the letter.

The judiciary chairman states that the committee's concerns include DOJ's "determination to withdraw a sentencing recommendation for President Trump's longtime associate, Roger Stone, which in turn (led) to the withdrawal of four career DOJ officials who were responsible for the case -- one of which went so far as to resign from the Department."

Controversy erupted over the Stone case earlier this month.

Prosecutors had initially asked Stone to be sentenced to seven to nine years in prison, resting that recommendation on the severity of his crimes and behavior. Trump called that ask "very unfair," however, in a late-night tweet. Barr overrode the recommendation the next day, saying seven years in prison would be too harsh a sentence.

In an extraordinary development, all four federal prosecutors who took the case against Stone to trial withdrew after top Justice Department officials undercut them and disavowed the government's recommended sentence. Trump denied any involvement in the sentencing revision.

Stone was convicted last fall of lying to Congress and threatening a witness regarding his efforts for Trump's 2016 campaign. He was recently sentenced to 40 months in prison.

Now, the Judiciary Committee is seeking interviews or testimony from the four prosecutors who withdrew from the case -- Aaron S.J. Zelinsky, Jonathan Kravis, Adam Jed and Mike Marando along with other current and former officials.

"The Judiciary Committee needs to examine a range of recent actions that smack of political interference, including the Department's withdrawal of the Roger Stone sentencing recommendation; intervening in the handling of the Michael Flynn prosecution; overruling the decision to relocate Paul Manafort to Rikers Island; opening investigations into career officials involved in the Russia investigation; and a series of controversial interventions into sensitive antitrust matters," Nadler said in a statement.

DOJ declined to comment to CNN on the letter from Nadler.

The letter from Nadler asks for a "full briefing concerning the criminal and civil matters identified in this letter," from the department. It also requests documents and communications "relating to President Trump, the Office of the Attorney General, Deputy Attorney General or the Executive Office of the President's involvement or interest" in those matters.