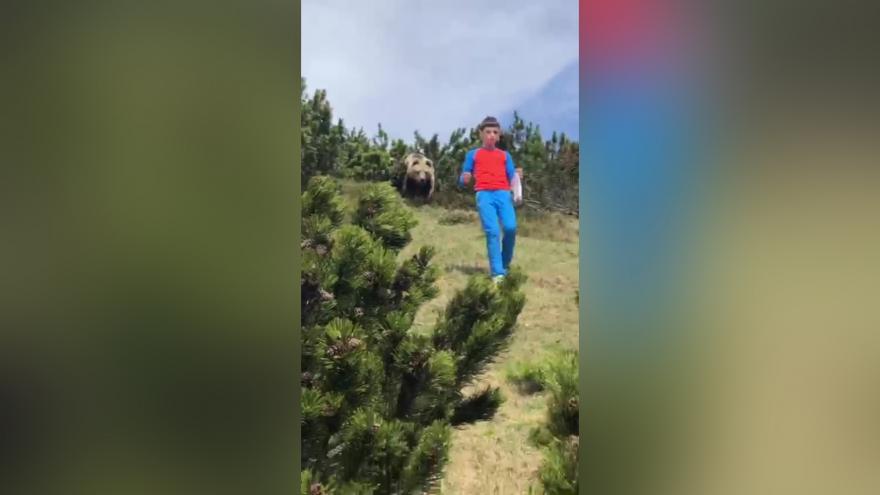 Loris Calliari
(CNN) -- An Italian family's mountain hike took a hair-raising turn after a brown bear followed a child down a mountain path during a day out.

In a video of the nail-biting encounter in Trentino, northern Italy, 12-year-old Alessandro can be seen walking slowly towards his stepfather -- as brown bear follows closely behind.

The boy's stepfather can be heard trying to coax the boy to keep moving towards him, calling "come, come Ale" as they move slowly through the bushes and down the path while the bear creeps behind the boy.

Loris Calliari, the boy's stepfather who captured the remarkable encounter on video, told CNN that, on Sunday morning, a group of around six family members set off for an excursion in the mountains near their home in the valley.

Alessandro was picking up pine cones in the bushes, where the family believes the bear, which they identified as an Marsican brown bear, had been sleeping.

Calliari told CNN that Alessandro loves animals, and in particular, bears, and when he saw the animal, he asked his stepfather to take a picture of him with the bear behind him.

"I noticed that he was moving and I told him (Alessandro) to walk slowly, to be careful, that I will take a picture but to move," Calliari said.

"I was nervous at first but then saw that the bear was not scared, was not acting, so I calmed down," he added.

But not everyone felt so serene, Calliari said, adding that the boy's mother and grandmother were both upset and screaming.

Alessandro, on the other hand, remained relaxed during the encounter, and at one stage can even be heard saying: "This is so cool."

About a month ago, they watched a YouTube video on what to do should they run into a bear, Calliari explained: "So, he was prepared."

Eventually, the brown bear loses interest and turns away, and Alessandro can be heard asking his stepfather: "Did you take the picture?"

The family decided to share the video on Facebook once they realized what an incredible experience they had captured on film, Calliari added.