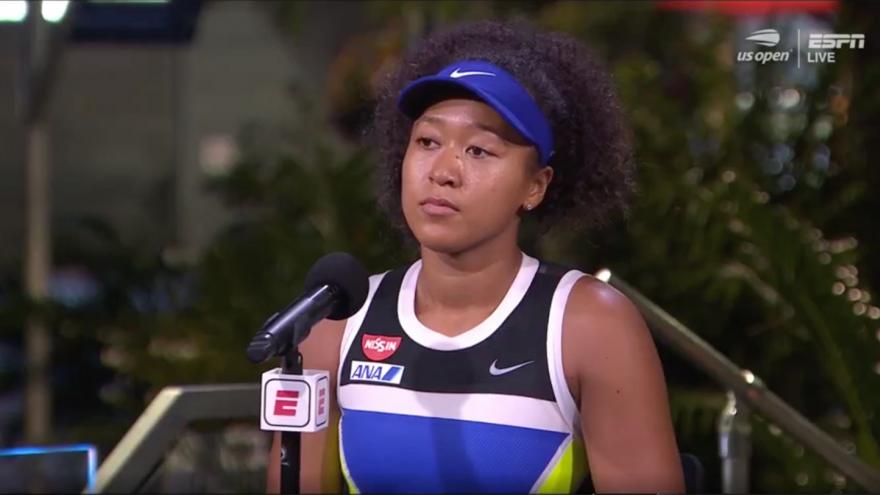 Originally Published: 09 SEP 20 02:52 ET
By Madeline Holcombe and Jill Martin, CNN
(CNN) -- After her win Tuesday night in the quarterfinal match of the US Open, tennis star Naomi Osaka was nearly brought to tears by video messages from the parents of Trayvon Martin and Ahmaud Arbery thanking her for honoring them during the tournament.

Before each match, Osaka has donned a face mask with the name of a different Black person whose death has sparked calls for racial justice.

Osaka has said she's using her platform to spread awareness about social justice.

After her match Tuesday night, Osaka appeared on ESPN's set at the USTA Billie Jean King National Tennis Center, where she was surprised with video messages from Martin's mother and Arbery's father.

Arbery, 25, was chased and fatally shot while jogging in Georgia in February. Martin, 17, was fatally shot by a neighborhood watch volunteer in Florida in 2012 as he walked home from a convenience store carrying iced tea and Skittles.

"I just want to say thank you to Naomi Osaka for representing Trayvon Martin on your customized mask and also for Ahmaud Arbery and Breonna Taylor," Sybrina Fulton, Martin's mother, said in a video message played for Osaka on ESPN. "We thank you from the bottom of our hearts. Continue to do well. Continue to kick butt at the US Open."

In a separate message, Arbery's father, Marcus Arbery, Sr., said "God bless you for what you're doing and you supporting our family with my son. My family really, really appreciates that, and God bless you."

"It means a lot," Osaka said after seeing the video messages. "I feel like -- I don't know. They're so strong. I'm not sure what I would be able to do if I was in their position. I feel like I'm a vessel at this point in order to spread awareness and it's not going to dull the pain, but hopefully I can help with anything that they need."

In a news conference later, Osaka said the messages were emotional and even shocking.

"Actually, I was just trying really hard not to cry," Osaka said. "It's extremely touching that they would feel touched by what I'm doing."

She has said she has seven masks prepared to wear with seven different names on them.

"It's quite sad that seven masks isn't enough for the amount of names, so hopefully I'll get to the finals and you can see all of them," she previously told ESPN.

Osaka has also worn masks with the names of Breonna Taylor, Elijah McClain and George Floyd, all of whom died at the hands of police officers.

Her hope is to encourage more people to do their own research about the deaths and racial injustice and to somehow improve the world for the next generation.

"I'm not sure what the world would look like if everything was peaceful, but I would hope that people help each other in times of great need. I would also hope that the older generation isn't scared to help the younger generation. For me, the biggest thing is I don't want people younger than me to suffer through the things I have to suffer through," she said.