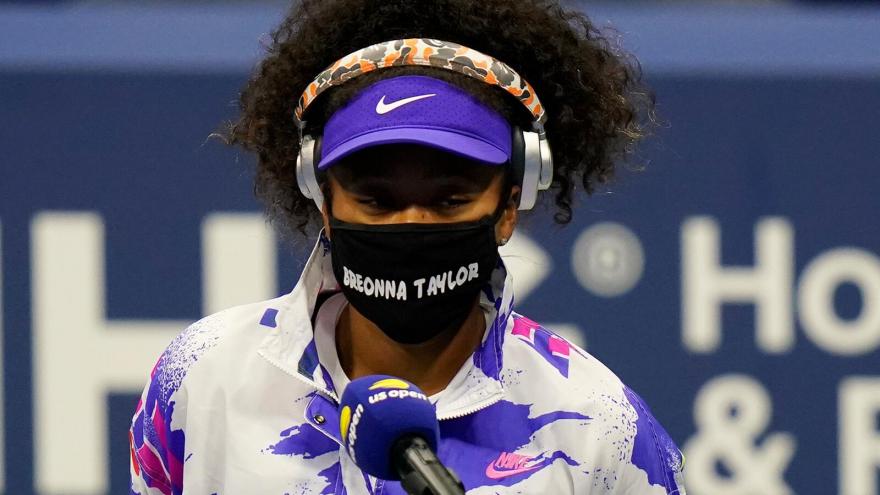 Naomi Osaka, of Japan, wears a mask in honor of Breonna Taylor before her match against Misaki Doi, of Japan, during the first round of the US Open tennis championships, Monday, Aug. 31, 2020, in New York.

(CNN) -- Naomi Osaka may have won her first-round match at the US Open -- but she wanted to ensure people didn't forget about Breonna Taylor.

Ahead of Monday's opening-round US Open match against Misaki Doi, Osaka entered the court wearing a face mask with the words "Breonna Taylor" on it.

As the US continues reckoning with racism and police shootings, the highest-paid female athlete says she's using her platform to spread awareness about social justice.

"I'm aware that tennis is watched all over the world, and maybe there is someone that doesn't know Breonna Taylor's story," Osaka told reporters. "Maybe they'll like Google it or something. For me, just spreading awareness. I feel like the more people know the story, then the more interesting or interested they'll become in it."

It has been more than 160 days since Taylor, an EMT and aspiring nurse, was killed in her own home when three plainclothes Louisville police officers executing a "no-knock" warrant returned gunfire after her boyfriend fired a warning shot because he thought he was shooting at intruders.

Osaka said she has seven masks and she started off with Taylor's name first "because she was most important. There are still marches going on even though people don't really talk about it," the 22-year-old said.

"I have seven," she told ESPN on court after her win against Doi. "It's quite sad that seven masks isn't enough for the amount of names, so hopefully I'll get to the finals and you can see all of them."

Osaka said on Wednesday she wouldn't play in her semifinal at the Western & Southern Open in New York City because there are "much more important matters at hand" than watching her play tennis.

She posted on social media about the "continued genocide of Black people" in response to shooting of Jacob Blake in Kenosha, Wisconsin. After the post, the US Open warmup announced there would be no play Thursday before resuming Friday. Osaka won her semifinal Friday before having to withdraw ahead of the final due to injury.

Tennis' stoppage followed the halting of NBA, MLB, MLS and WNBA games in the aftermath of Blake's shooting and subsequent protests.