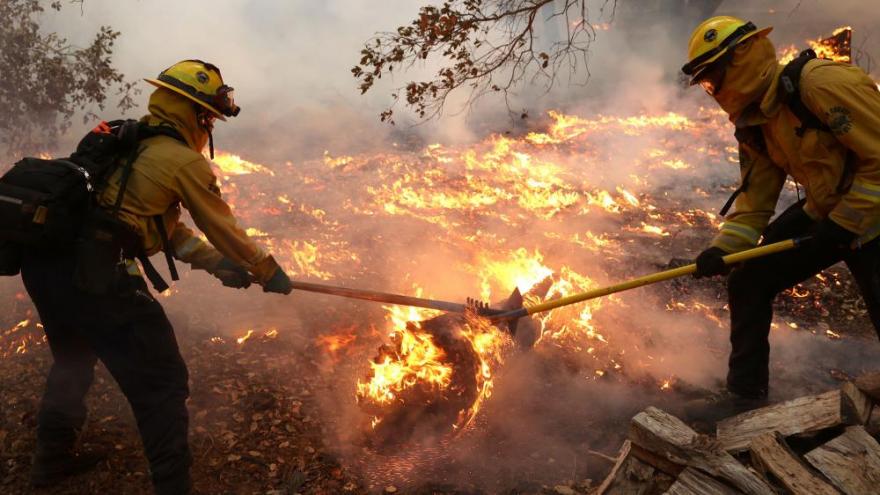 (CNN) -- A fire that began overnight in Napa County, California, has rapidly burned 1,000 acres and forced about 2,000 people and a local hospital to evacuate on Sunday.

The Glass Fire, which began as a 20-acre brush fire near Deer Park, could spread further by winds that are expected throughout the day, Cal Fire said. The fire is 0% contained.

The fire was reported at 3:50 a.m.PT, Napa County spokeswoman Janet Upton said. The fire is burning near St. Helena, about 25 miles east of Santa Rosa. Cal Fire said the cause is under investigation.

Upton said about 660 homes -- or about 2,000 people -- have evacuated. St. Helena Hospital was evacuated out of an abundance of caution, the second time the hospital has evacuated this fire season.

Evacuation orders are in place for parts of the surrounding area, and an evacuation center has been opened at the Crosswalk Community Church in Napa, according to the Napa County Office of Emergency Services.

"We activated the high-low siren on our vehicles because we knew we needed to get people out of there quickly," Wofford said. "When they hear that high-low siren coming from cars as we drove through their neighborhoods they know it's time to evacuate. The motto is, 'If I can hear it, it's time to go.'"

Craig Philpott posted photos and videos to his Twitter account that show the Glass Fire blazing red overnight and the fire's smoke choking the air on Sunday morning.

Critical fire weather conditions are in place across much of northern California and portions of Los Angeles and San Bernardino counties. Drought, strong winds, dry vegetation and above-average temperatures are expected across the fire-weary West.

The blaze continues a remarkable wildfire season in the western US that scientists warn is a preview of a new normal as human activity and carbon emissions make the earth hotter and dryer.

Nine months into the year, more than 44,000 fires across the US have burned more than 7.1 million acres, according to the National Interagency Fire Center. That's already 1 million more burned acres than the yearly average over the last 10 years. An average of 46,409 fires are reported each year.

In California, five of the state's top 10 largest fires in recorded history, in terms of acreage, have occurred in 2020 and are still burning.