NASA wants to put you on a rover to Mars 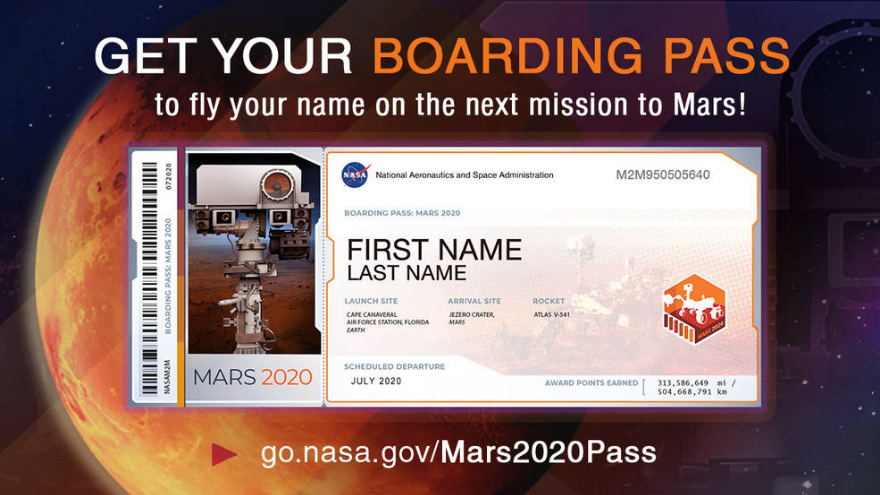 (CNN) -- Ready to go to Mars? Well, you can get a boarding pass for a trek to the Red Planet, but only your name will make the trip.

NASA's wants to launch its next rover to Mars next summer, with a planned landing in February 2021. The space agency is giving people the opportunity to have their names put on the rover (etched on microchips). The Mars 2020 rover will lay the groundwork for eventual human exploration of Mars. It will also study Mars' climate and geology, collect samples and search for signs of microbial life.

Names will be really small

In addition to their names being put on the rover, people will receive a souvenir boarding pass and "frequent flyer" points.

"As we get ready to launch this historic Mars mission, we want everyone to share in this journey of exploration," Thomas Zurbuchen, associate administrator for NASA's Science Mission Directorate, said in a news release. "It's an exciting time for NASA, as we embark on this voyage to answer profound questions about our neighboring planet, and even the origins of life itself."

A lab for microdevices at NASA's Jet Propulsion Laboratory will use an electron beam to stencil in the names that the public submits, NASA said. The names will be etched on a silicon chip in teeny-tiny text (smaller than the width of a human hair). So NASA could easily put more than a million names on a single chip that's the size of a dime. One or more chips will sit under a glass cover on the rover.

NASA did something similar when it sent its InSight lander to Mars, which landed on the planet last year. More than two million names are affixed to InSight.

The Mars 2020 rover is all part of NASA's grand plan to send humans back to the moon and then eventually on to the Red Planet.