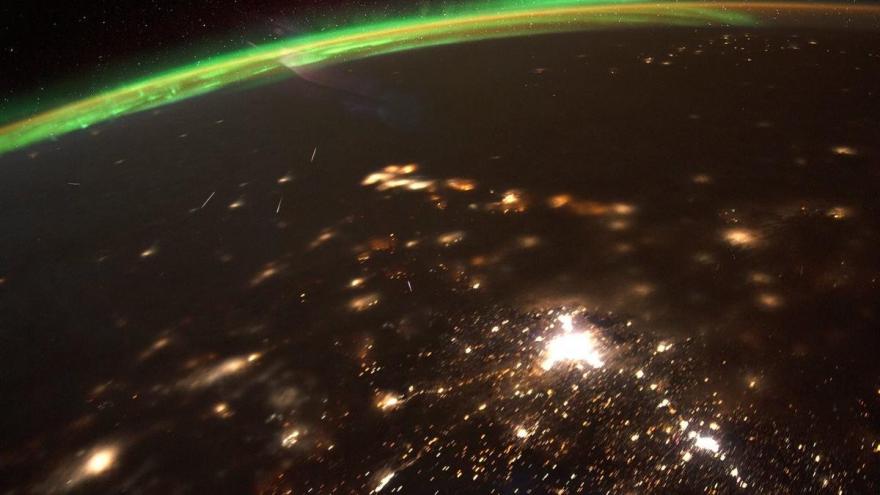 (CNN) -- An astronaut on board the International Space Station had a front row view of "shooting stars" lighting up the sky over the Northern Hemisphere last weekend.

NASA astronaut Christina Koch posted a dazzling image of the Quadrantid meteor shower -- the first meteor shower of 2020 -- with a tweet saying that the shooting stars could be seen from space.

The composite image shows the bright lights of several meteors blazing into the atmosphere. Also captured were green bands of the aurora borealis, or northern lights.

Quadrantids are known for their bright fireball meteors -- larger explosions of light and color that can last longer than an average meteor streak, according to NASA.

"The Quadrantids, which peak during early January each year, are considered to be one of the best annual meteor showers," NASA says on its solar system exploration website.

Koch made history in December, setting the record for the longest single spaceflight by a woman after she exceeded the previous record, set by NASA astronaut Peggy Whitson in 2017, of 288 consecutive days in space.

Based on NASA's schedule, Koch will remain on the International Space Station until February 2020, falling just shy of the longest single spaceflight by a NASA astronaut: 340 days, set by Scott Kelly. Astronauts normally stay on the station for six months.

The image is the latest of many fascinating photographs and videos that Koch has shared on social media, including what she does in her free time and stunning images of Earth from space.