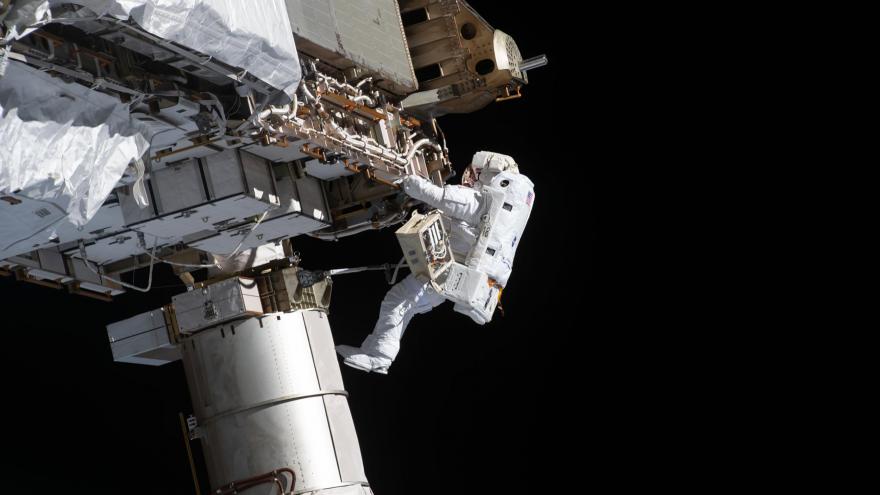 Victor Glover works outside the space station during a spacewalk on January 27. - NASA/FILE

(CNN) -- Astronauts Mike Hopkins and Victor Glover Jr. spent their Saturday conducting a spacewalk outside of the International Space Station.

The spacewalk, which assisted with continued upgrades to the orbiting laboratory, began at 8:14 a.m. ET and ended at 3:01 p.m. ET, lasting for six hours and 47 minutes.

Glover and Hopkins arrived on the space station in November as part of the NASA-SpaceX Crew-1 mission. This will be Glover's fourth spacewalk and the fifth for Hopkins.

Hopkins and Glover vented early ammonia system jumper cables and relocated one of them and reconnected it to the current cooling system for more efficiency. Ammonia is part of the station's cooling system.

Building on tasks they completed together during their spacewalk on January 27, the two NASA astronauts also connected cables for the European Space Agency's Columbus module's Bartolomeo platform and replaced a cable for an amateur radio system, according to the agency. Bartolomeo can host external payloads.

Some of their other tasks included replacing a wireless antenna assembly on the first US-built module known as Unity, installing a stiffener on the airlock's flexible thermal cover where astronauts come and go during spacewalks and routing cables to provide ethernet capabilities for two high-definition cameras outside the station.

A few of the tasks included in this spacewalk were catch-up items that were originally planned for recent spacewalks. However, they were rescheduled for Saturday so the previous spacewalks could be devoted to installing modification kits that will allow for the arrival of new solar arrays outside the station later this year. These arrays will help boost power on the space station.

The spacewalk occured around the one-year anniversary of many Americans going into quarantine. Hopkins and Glover addressed the timing in a video released by NASA on Friday.

"We're there for each other," Glover said. "From 250 miles up, I see us united as a people. And as we wait for the vaccines to be rolled out and administered, we're going to be patient and do what's right. Crew-1 named our Dragon capsule Resilience in part to honor all of you and the amazing tenacity that you've shown over the past year while overcoming obstacle after obstacle. Keep it up and take care of each other."

"Yes, it's been one tough year," Hopkins added. "But together we can make sure there's a brighter year ahead."

Throughout the pandemic, NASA has been able to safely continue launching astronauts to the space station, including the historic Crew-1 mission that carried Glover and Hopkins, as well as NASA astronaut Shannon Walker and Japanese Aerospace Exploration Agency astronaut Soichi Noguchi.

The space station is about to see a flurry of activity over the next month.

Russian space agency Roscosmos cosmonauts Oleg Novitskiy and Pyotr Dubrov and NASA astronaut Mark Vande Hei will launch to the space station from the Baikonur Cosmodrome in Kazakhstan on April 9.

Vande Hei was selected as an astronaut in 2009 and had his first spaceflight experience on the space station from September 2017 to February 2018. During his 168 days aboard the station, Vande Hei conducted four spacewalks.

This time around, Vande Hei and the crew will work on multiple experiments, including studies about Alzheimer's disease and portable ultrasound devices.

Vande Hei's flight on the Soyuz spacecraft is part of a contract with Axiom Space of Houston. In return, NASA will essentially save a seat on a future commercial spacecraft launch in 2023 for a non-NASA space station crew member.

While NASA works with Boeing and SpaceX to ensure safe crew transport to and from the space station using US-based launches, grabbing one seat on the Soyuz means that there will always be at least one US crew member on the space station.

The return of Crew-1 depends on when Crew-2 launches.

Crew-2, which could launch April 22, will join Crew-1 on the space station before Crew-1 returns to Earth.