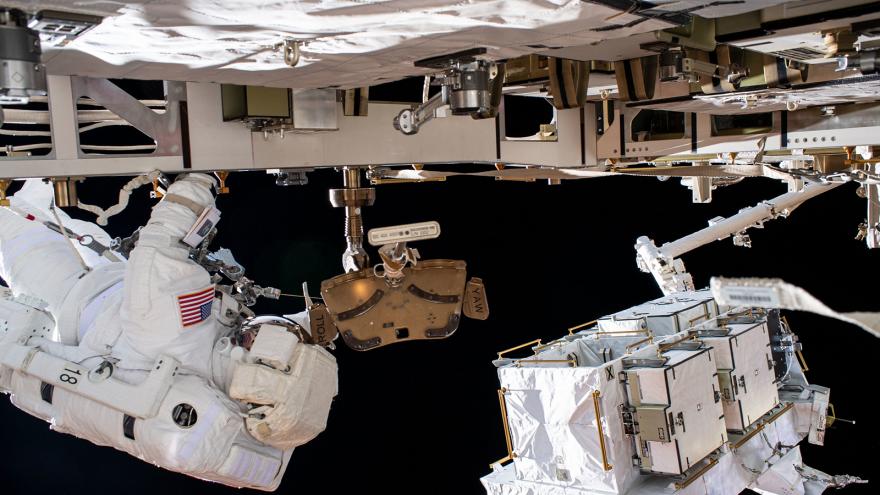 NASA astronaut Bob Behnken (at left) is pictured during a spacewalk to swap batteries and upgrade power systems on the International Space Station\'s Starboard-6 truss structure. Pictured at lower right, is an external pallet, gripped by the Canadarm2 robotic arm, that housed the batteries replaced on the orbiting lab. Credit: NASA
By Ashley Strickland, CNN

(CNN) -- NASA astronauts Chris Cassidy and Robert Behnken began a spacewalk early Tuesday morning outside of the International Space Station to upgrade station systems. It's the 300th spacewalk by US astronauts, according to NASA.

The spacewalk began at 7:12 a.m. ET and is expected to last for about seven hours.

During the spacewalk, Cassidy and Behnken will install a protection unit used to store tools for the Canadian Space Agency's Dextre robot, as well as two Robotic External Leak Locator units. Dextre can use these to detect ammonia leaks. Ammonia is used in the station's cooling system.

Working on the station's backbone, the astronauts will also remove two fixtures at the base of the station's solar arrays that were used prior to launch.

The astronauts will prepare the Tranquility module for the NanoRacks commercial airlock, which will arrive at the station on a SpaceX cargo flight later this year. The airlock will assist with deploying experiments.

During their work on the module, the astronauts discovered foreign orbital debris, which they removed using a scraper.

The last tasks of the day will including routing ethernet cables and removing a lens filter cover on an external camera.

A future spacewalk later this year will complete power system upgrades to the space station by replacing one lithium ion battery installed in 2019 that shorted out.

It will be the culmination of the power system upgrades to the space station that have occurred over the last three and a half years to replace 48 aging nickel-hydrogen batteries with 24 new lithium ion batteries.

These power system upgrades, however, are nothinglike replacing batteries in your television remote. The new batteries each have a mass of 428 pounds.

The upgrades have required 11 spacewalks since January 2017, so far, to replace the batteries.

Both astronauts are veteran spacewalkers. This was the tenth venture outside for both Cassidy and Behnken, according to NASA. This puts them in a tie with NASA astronauts Michael Lopez-Alegria and Peggy Whitson for the most spacewalks by Americans.

Behnken, along with NASA astronaut Doug Hurley, launched from the United States and joined Cassidy on the space station on May 31. They were aboard SpaceX's Crew Dragon during the Demo-2 mission.

Last week, the agency announced that Behnken and Hurley will return on the SpaceX's Crew Dragon on August 2.

Hurley helped Cassidy and Behnken into their spacesuits and will support the astronauts from inside the space station.

Although this is the 231st spacewalk in the history of assembling, maintaining and upgrading the space station, it's the 300th spacewalk involving US astronauts.

The first spacewalk by an American astronaut was conducted by NASA astronaut Ed White on June 3, 1965. He left the Gemini 4 capsule at 3:45 p.m. ET and remained outside of it for 23 minutes.

Gemini 4 circled the Earth 66 times in four days. During the spacewalk, White began over the Pacific Ocean near Hawaii and went back inside the capsule as they flew over the Gulf of Mexico.

He exited the spacecraft using a hand-held oxygen-jet gun to push himself out, attached to a 25-foot safety tether. NASA astronaut James McDivitt, on the mission with White, took photos of White in space from inside the capsule.

White later said the spacewalk was the most comfortable part of the mission, and said the order to end it was the "saddest moment" of his life, according to NASA.