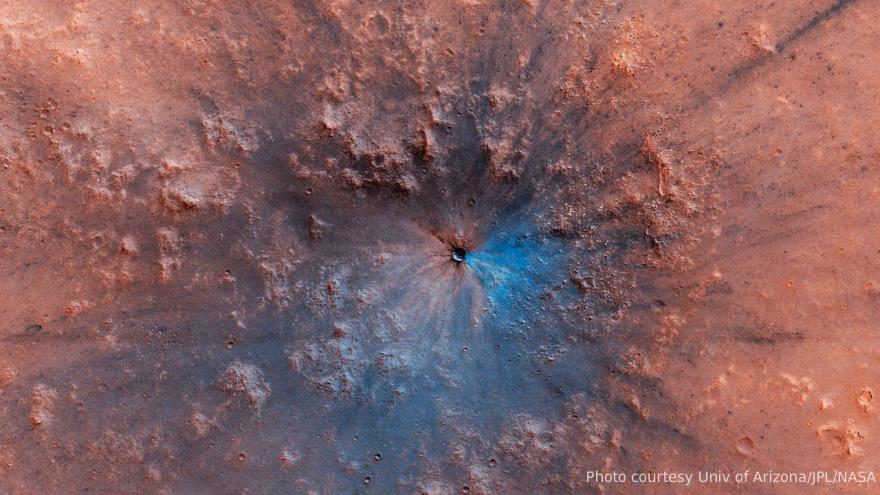 (CNN) -- A new image of the Red Planet features some other colors.

NASA has spotted a new impact crater on the surface of Mars, and scientists have released an image of it showing some blue and purple.

The impact exposed the darker material beneath the planet's characteristic reddish dust, according to the HiRISE Camera website that released the image.

"That has not yet been confirmed, but commonly, when a HiRISE image of a new impact shows a blue area, it is sometimes water ice," Bray said in a statement to CNN.

However, Leslie Tamppari, deputy project scientist for the Mars Reconnaissance Orbiter, told CNN the blue color might turn out to be nothing.

"I don't know that we should read anything into it," Tamppari said. "They stretch these images. It's all false color, not true color ... (because) we don't have every wavelength covered."

The crater, about 16 meters wide, is estimated to have formed between September 2016 and February 2019. It is located just south of Valles Marineris canyon system.

Scientists have found more than 500 impact craters on the planet, Tamppari said. By studying these craters, they can learn about the impact cratering process, statistics of small craters and the frequency of impacts.

"We've been surprised by how dynamic Mars is," Tamppari said. "We see active cratering going on all the time."

Last week, the University of Arizona, which operates the HiRISE Camera on the Mars Reconnaissance Orbiter, released an image of a strange chevron on Mars that resembles the symbol for "Star Trek's" Starfleet.