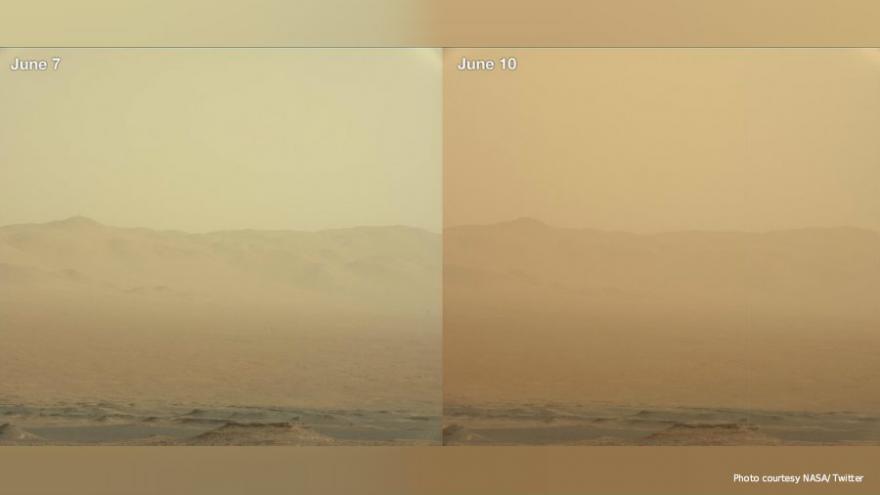 CAPE CANAVERAL, Fla. (AP) — NASA's seemingly unstoppable Mars rover Opportunity has been knocked out by a gigantic dust storm that is enveloping the red planet and blotting out the sun.

Officials said Wednesday they're hopeful the rover will survive the storm, which already covers one-quarter of Mars and is expected to encircle the planet in another few days. It could be weeks or even months, though, until the sky clears enough for sunlight to reach the Martian surface and recharge Opportunity's batteries through its solar panels.

For now, Mars' oldest working rover is stuck in the middle of the raging storm, in round-the-clock darkness.

"By no means are we out of the woods here," said John Callas, the Opportunity project manager at NASA's Jet Propulsion Laboratory in Pasadena, California. "This storm is threatening, and we don't know how long it will last, and we don't know what the environment will be like once it clears."

Flight controllers tried late Tuesday night to contact Opportunity, but the rover did not respond. The storm has been growing since the end of May with unprecedented speed.

Simulated views of a darkening #Martian sky blotting out the Sun from the #Mars Opportunity rover’s point of view in the current global dust storm. @NASA will provide updates on the status of @MarsRovers via a media telecon today at 1:30 PM ET: https://t.co/ornPrmseps. #AskNASA pic.twitter.com/PcX7vHz9Tk

NASA launched the twin rovers Opportunity and Spirit in 2003 to study Martian rocks and soil. They landed in 2004. Spirit hasn't worked for several years. Opportunity, however, has kept exploring well past its expected mission lifetime.

Scientists aren't nearly as concerned about the newer, nuclear-powered Curiosity rover on the other side of Mars, which is already seeing darkening skies.

Dust storms crop up every so often at Mars, sending dust tens of miles (kilometers) into the atmosphere and turning day into night. Spacecraft orbiting Mars are too high to be affected.

There's no chance of Opportunity being buried or getting a wheel stuck in dust. Even in the worst of storms, only a layer of fine dust is left behind. Managers said the main concern is that dust could temporarily cover its optical instruments.

The rover's batteries are likely so low that only a clock is still working, to wake the spacecraft for periodic power-level checks, according to officials. If the clock also goes offline, then the rover won't know what time it is when it comes back on and could send back signals at any time.

In 2007, a massive dust storm kept Opportunity silent for a few days. It jumped back into action after awakening from its deep self-protecting slumber.

This time, the rover's energy level is believed to be much lower. On the plus side, Martian summertime is approaching and that should keep temperatures up at night and prevent the batteries and other parts from freezing. Besides electrical heaters, Opportunity is equipped with eight tiny plutonium-powered heaters.

Scientists are eager to learn as much as they can about the dust storm to hone their weather forecasting skills. Astronauts living on Mars, for instance, wouldn't want to get caught outside in a fierce dust storm, where winds can reach 70 mph (113 kilometers per hour) — almost hurricane force. The Martian atmosphere is so thin that while the wind can lift dust off the surface, it doesn't topple a spacecraft.

Opportunity was in remarkably good health going into the storm, Callas said, with only an arthritic joint in its robotic arm.

"Keep in mind, we're talking about a rover that's been working at Mars, hanging in there, for 15 years and designed just for 90 days," said Jim Watzin, director of NASA's Mars exploration program. "It just doesn't get any better than that."