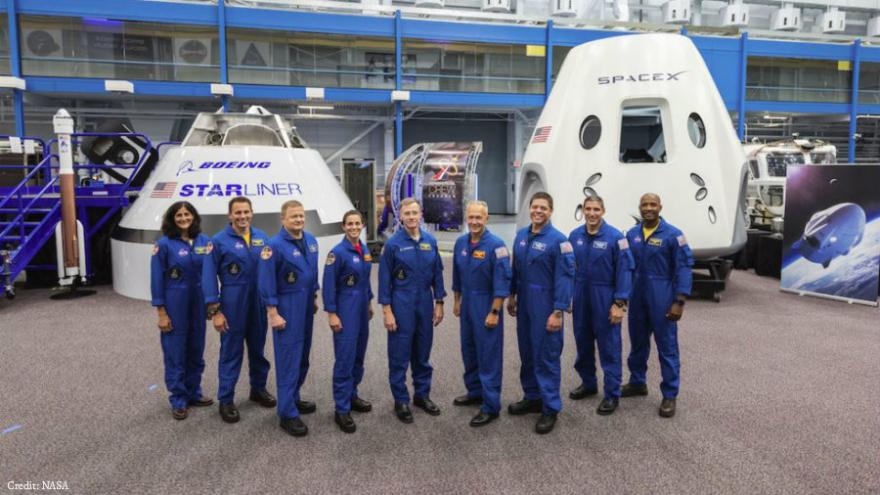 (CNN) -- NASA has tapped nine astronauts to become the first to launch to space from American soil since the Space Shuttle program was retired in 2011.

The seven men and two women will also be the first astronauts to fly in capsules developed and built by the private sector as part of NASA's Commercial Crew Program.

Since 2011, the United States has relied on Russia to ferry astronauts to the space station. SpaceX and Boeing were picked by NASA in 2014 to develop spacecrafts to return that capability to the United States, and both companies are slated to launch their first crewed missions in the next year. Some, however, deem that target ambitious.

During an announcement Friday to introduce the astronauts at Johnson Space Center in Texas, NASA administrator Jim Bridenstine said the "health of NASA and our space exploration program is as strong as it's ever been."

All nine astronauts have military experience, and most are seasoned veterans of space.

Chris Ferguson, a former NASA astronaut who has worked with Boeing as it developed its Starliner spacecraft, will fly as a private astronaut. As the other astronauts donned NASA patches on their blue jumpsuits, Ferguson wore a Boeing applique.

Ferguson will fly with NASA astronauts Eric Boe, a veteran of two Space Shuttle missions, and Nicole Aunapu Mann on the first crewed test flight of Starliner, which is currently projected to take place in mid-2019. It will mark Mann's first trip to space.

The first crewed test flight of SpaceX's Crew Dragon capsule will include NASA astronauts Bob Behnken and Doug Hurley. That flight is currently projected to lift off in April of 2019. It will be the third trip to space for both Behnken and Hurley.

The first full mission of Boeing's Starliner, which will fly to the ISS for a long-duration stay, will take ISS veteran Suni Williams and spaceflight newcomer Josh Cassada. Williams has already spent more than 300 days in space.

Victor Glover and Mike Hopkins, who has spent more than 160 days in space, were selected to crew SpaceX's first full mission. It will be Glover's first mission.

NASA ended the shuttle program seven years ago after 135 missions as the space agency shifted its priorities to developing hardware for deep space travel. Since the final shuttle mission ended, NASA has paid Russia about $70 million per seat to carry astronauts to and from ISS.

NASA's deal with Russia is due to run out at the end of the decade, and delays faced by SpaceX and Boeing have the firms bumping up close against deadlines.

The Government Accountability Office recently issued a warning to NASA that it needs to have a contingency plan in place to ensure continued access to the space station, which costs the US about $3 billion annually.

Over the past several years, NASA has pushed the private sector to maintain a presence in low-Earth orbit. Meanwhile, the space agency has turned its attention to developing the Space Launch System launch vehicle and Orion spacecraft that could travel to the Moon or Mars.