NASA spacecraft sends back images of stars from 4.3 billion miles away 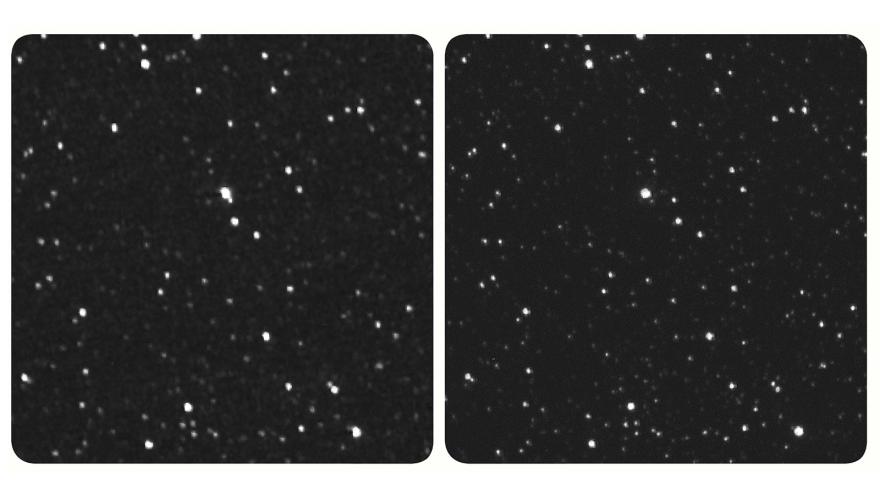 The New Horizons image of Proxima Centauri is on the left. If you have a stereo viewer, you can use it on this image. If not, look at the center of the image and let your focus shift to see the combined third image.
(CNN) -- From its unique vantage point 4.3 billion miles from Earth, NASA's New Horizons spacecraft has captured images of nearby stars — and the stars appear to be in different positions than where we see them from Earth.

This is the first time this kind of "parallax effect" has been captured using a spacecraft. You can mimic this by holding a finger about an arm's length from your face and see how it appears to jump when you close your left or right eye, according to a release by NASA.

"It's fair to say that New Horizons is looking at an alien sky, unlike what we see from Earth," said planetary scientist Alan Stern, New Horizons principal investigator from the Southwest Research Institute in Boulder, Colorado, in a statement.

"That has allowed us to do something that had never been accomplished before — to see the nearest stars visibly displaced on the sky from the positions we see them on Earth."

New Horizons is on a course to interstellar space, much like the Voyager probes. It previously flew by Pluto and its moons in 2015 before conducting a flyby of the distant Kuiper Belt object,known asArrokoth, in January 2019.

In April, at a distance of 4.3 billion miles from Earth, New Horizons aimed its long-range telescopic camera to nearby stars Proxima Centauri and Wolf 359. They are still 4.2 and 7.795 light-years away from us, respectively.

The stars appeared to be in different locations through the parallax effect, meaning that the stars seemed to shift against the background since New Horizons was viewing it from a different view point. Scientists use the parallax effect to measure the distances to stars.

Stars, including our sun, are always moving. But we're so far away from these stars and they move over such large time scales that it's difficult to see this motion.

"No human eye can detect these shifts," Stern said.

However, the images captured by New Horizons could be compared to images taken on the same days by Earth-based telescopes, which made the shift obvious.

"The professional and amateur astronomy communities had been waiting to try this, and were very excited to make a little space exploration history," New Horizons science team member Tod Lauer said.

New Horizons sent the images it captured back to Earth via radio signal. The signal traveled at the speed of light and reached Earth about six and a half hours later.

"It could be argued that in astro-stereoscopy — 3D images of astronomical objects — NASA's New Horizons team already leads the field, having delivered astounding stereoscopic images of both Pluto and the remote Kuiper Belt object Arrokoth," May said.

"But the latest New Horizons stereoscopic experiment breaks all records. These photographs of Proxima Centauri and Wolf 359 — stars that are well-known to amateur astronomers and science fiction aficionados alike — employ the largest distance between viewpoints ever achieved in 180 years of stereoscopy!"