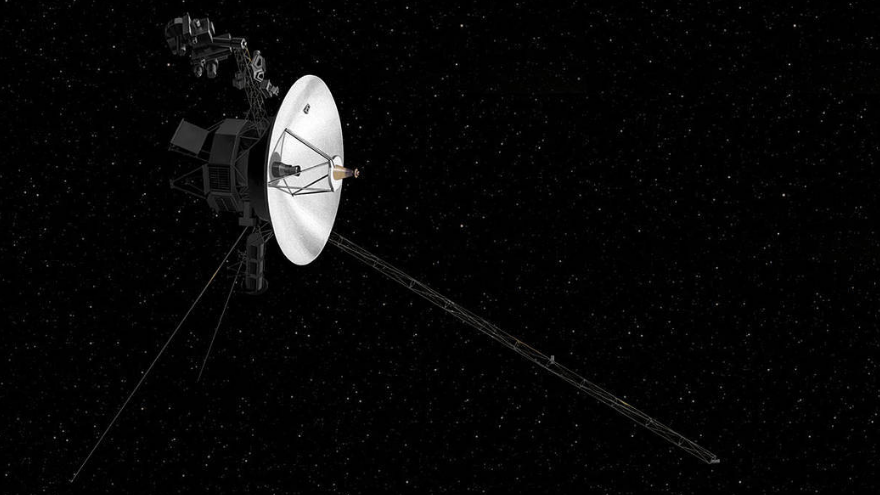 (CNN) -- NASA's Voyager 2 probe, launched in 1977, is now more than 11 billion miles from Earth and has reached interstellar space, the agency said Monday. This is the second time a human-made object has reached this part of space. And it's an incredible feat for a spacecraft designed to last five years.

Voyager 2 is now NASA's longest-running mission, with 41 years under its belt.

This boundary is where hot solar wind meets cold interstellar space, and it's called the heliopause. Mission scientists compared data from instruments on Voyager 2 to determine that the actual date of the crossing was November 5, when the solar wind particles around the probe dipped greatly, meaning it left the heliosphere.

"There is still a lot to learn about the region of interstellar space immediately beyond the heliopause," Voyager project scientist Ed Stone said in a statement.

Voyager 1, launched just a few weeks after Voyager 2, crossed the same boundary in 2012 and exited the heliosphere, a bubble of magnetic fields and particles created by the sun.

However, just because the probes have left the heliosphere doesn't mean they have left our solar system. Its boundary is the outermost edge of the Oort Cloud, a group of small objects influenced by the gravity of our sun.

The mission scientists believe that it would take Voyager 2,300 years to reach the inner edge of the cloud and 30,000 years to fly past it completely.

Voyager 2 carries something unique: the Plasma Science Experiment instrument. This instrument stopped working on Voyager 1 in 1980, but it's still operating on Voyager 2.

The instrument will be able to take unprecedented observations in this part of interstellar space and send them back to mission scientists. The scientists can still communicate with Voyager 2, even in interstellar space, but the data takes about 16.5 hours to travel back to Earth.

"Voyager has a very special place for us in our heliophysics fleet," Nicola Fox, director of the Heliophysics Division at NASA Headquarters, said in a statement. "Our studies start at the Sun and extend out to everything the solar wind touches. To have the Voyagers sending back information about the edge of the Sun's influence gives us an unprecedented glimpse of truly uncharted territory."

The probes are now "senior citizens," but they're in "good health" considering their age, Voyager project manager Suzanne Dodd said Monday. The greatest concerns about keeping the probes operating are power and thermal. Voyager 2 loses about 4 watts of power a year, and mission scientists have to shut off systems to keep instruments operating. The cameras for both probes are no longer on.

Voyager 2 is very cold -- about 3.6 degrees Celsius or 38 degrees Fahrenheit, close to the freezing point of hydrogen -- causing concerns about the probe's thruster.

Trades between power and thermal will continue to keep it operating as long as possible.

"There is a lot of science data ahead, and we anticipate we can operate for five to six or almost 10 more years, just not with all instruments on," Dodd said. "There are difficult decisions ahead, but those will be made with getting the most science value back. My personal goal is to get them to last 50 years total."

Voyager 2 launched August 20,1977, 16 days before Voyager 1. Both probes are landmark missions that continue the journey of exploration in unexplored territory, the agency said. Both were designed as five-year missions to study Jupiter and Saturn up close, and when those were successful, flybys were added for Uranus and Neptune.

Remote-control programming allowed the spacecraft to keep flying well beyond their intended targets and explore more of the "final frontier."

Both probes still carry Golden Records containing pictures, messages and sounds from Earth because the spacecraft could outlast human civilization by billions of years.

"I think we're all happy and relieved that the Voyager probes have both operated long enough to make it past this milestone," Dodd said. "This is what we've all been waiting for. Now, we're looking forward to what we'll be able to learn from having both probes outside the heliopause."