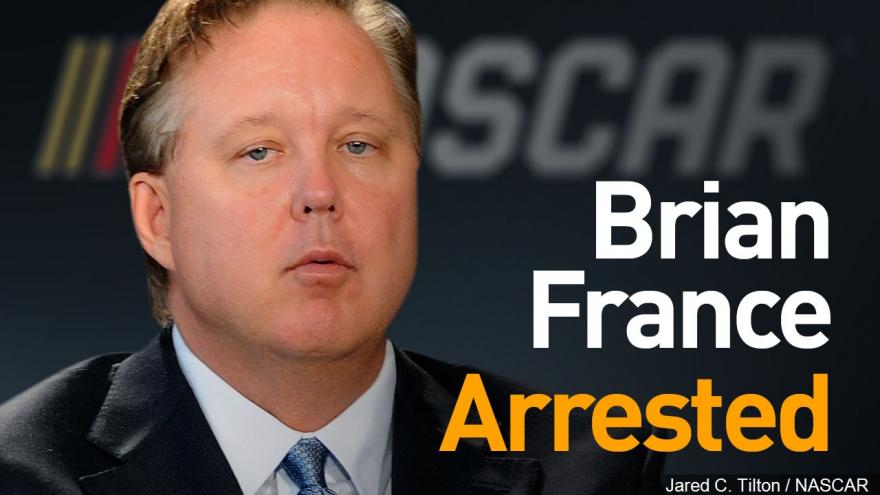 SAG HARBOR, N.Y.  (CNN) -- NASCAR CEO Brian Z. France apologized and said he is taking a leave of absence after he was arrested on New York's Long Island on allegations of aggravated driving while intoxicated and possession of a controlled substance.

France, the leader of the auto-racing sports governing body, was driving a 2017 Lexus on Sag Harbor Village's Main Street at 7:30 p.m. Sunday and ran a stop sign, police said.

During a traffic stop, it was determined he was operating the vehicle while intoxicated, police said.

Police said he was in possession of oxycodone pills. He was arrested and held overnight, police said.

France was arraigned at Sag Harbor Village Justice Court on Monday morning and then released on his own recognizance.

"I apologize to our fans, our industry and my family for the impact of my actions last night," France said in a statement later Monday.

"Effective immediately, I will be taking an indefinite leave of absence from my position to focus on my personal affairs."

NASCAR was created by William H.G. France, a stock car driver and gas station owner, in 1947 and has stayed in the France family's name.

Brian France, the founder's grandson, was named NASCAR's chairman of the board and CEO in September 2003.

NASCAR Vice Chairman and Executive Vice President Jim France, who is Brian France's uncle, has assumed the role of interim chairman and CEO, the organization said.