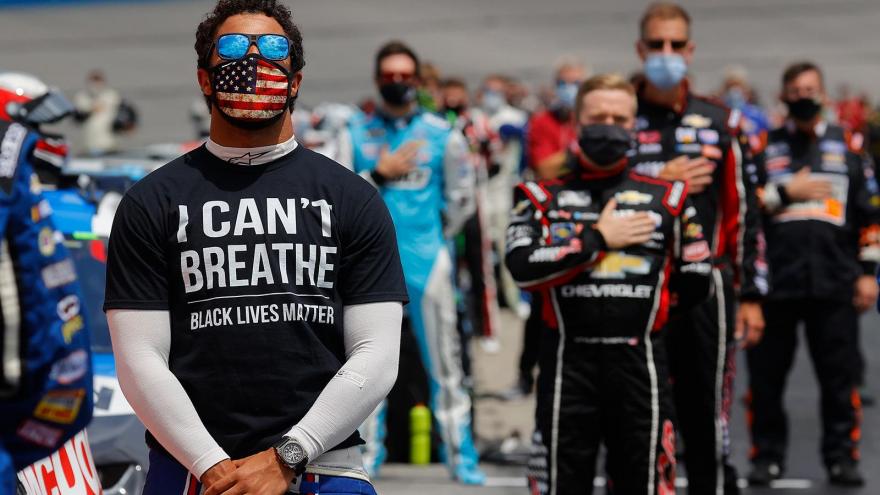 Bubba Wallace, driver of the #43 McDonald's Chevrolet, wears an "I Can't Breath - Black Lives Matter" T-shirt under his fire suit in solidarity at Atlanta Motor Speedway on June 7, 2020.

(CNN) -- NASCAR drivers have joined the growing list of athletes and sports leagues throwing their support behind the nationwide protests against police brutality.

Wallace also tweeted a NASCAR-sponsored video of him and fellow drivers discussing how they will advocate for change to fight racism and inspire change.

"We will listen and learn! #BlackLivesMatters," Wallace tweeted.

Wallace's statements and tweets come as protests gather across the US and around the globe to call for police reform, especially when it comes to relations with black and brown communities. The protests were sparked by the death of George Floyd, an unarmed black man who died after a Minneapolis police officer placed his knee on Floyd's neck for over eight minutes.

Other NASCAR drivers also spoke up Sunday. The legendary Jeff Gordon made a powerful statement during Sunday's broadcast saying he and Wallace's professional and personal journeys are different.

"I'll never know what it's like to walk in Bubba's shoes or the shoes of anyone that's experienced racism. I do know I can be better; we can do better to create positive change," Gordon said. "We need to step up now more than we ever have in the past. We are listening. We are learning. We are ready for change."

"We stand with you. Not being racist is not enough, we need to be anti-racist and make a REAL change! #blacklivesmatter," his tweet read.

NASCAR also invited Keedron Bryant, the 12-year-old who went viral for his song "I just wanna live," to sing the National Anthem.