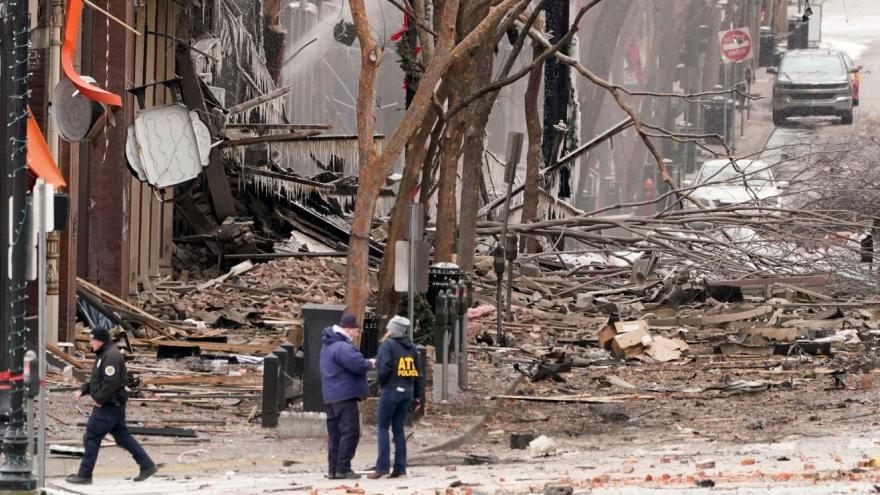 Emergency personnel work near the scene of an explosion in downtown Nashville on Dec. 25.

(CNN) -- Metro Nashville Police Department Officer Tyler Luellen was the first to arrive on Second Avenue North in Downtown Nashville on Christmas morning to a call of shots fired.

When he arrived, he didn't hear any shots. As he was investigating, Officer Brenna Hosey arrived to back him up.

"As soon as she got out of the car, almost immediately, the RV started making an announcement," Luellen, a three-year veteran of the Nashville police force, told reporters on Sunday. "Somewhere along the lines of, don't quote me exactly, but, 'There's a large bomb within this vehicle. Your primary objective is to evacuate.'"

"I wasn't quite sure what I heard, so I looked at Officer Hosey just to verify we heard the same thing," he said. "And then it started over."

Not long afterwards, that RV would explode, knocking Luellen off his feet, damaging dozens of businesses and injuring three people -- but not before Nashville officers went door-to-door to get nearby residents out of harm's way.

Officials credited Luellen, Hosey and four other Nashville officers with the fact more people weren't injured or killed by the blast. Besides Luellen and Hosey, the officers have been identified as Officer Amanda Topping, Officer James Wells, Officer Michael Sipos and Sgt. Timothy Miller.

At a news conference Sunday, five of those six officers gave firsthand accounts of that morning, what they saw and what they experienced -- from the eerie messages broadcast by the RV and their efforts to save lives, to the shock of the blast and the fears for their fellow officers.

"This is going to tie us together forever, for the rest of life," said Officer Wells.

'We're moving as quickly as we can'

After the RV's message started playing, Luellen said he notified Sgt. Miller, who said to get everyone out of there. Luellen requested all available units.

"By the tone of his voice, we knew it was serious," said Wells, who was with Topping.

"We got over there as quick as we could, not knowing that the RV was the vehicle in question," he said. "At the time, we actually pulled right in front of it."

As the officers arrived at the scene and waited for the bomb squad to arrive, Sipos and Hosey went inside an apartment building and began knocking on doors. Sgt. Miller also arrived and told the officers to move their vehicles into a more strategic position before they joined the others in going door-to-door. Meantime, Topping remained on the street to keep pedestrians away.

"Between myself and all the other officers knocking on doors I believe we made contact with six or seven families," Sipos said.

Soon, the RV's message changed to a countdown, announcing the vehicle would detonate.

"At this point is when we heard the 14 minutes til detonation announcement," said Hosey, "so we're moving as quickly as we can."

After clearing the first building, the officers began making their way southbound, Sipos said. They made it into another apartment building but didn't make contact with anyone inside.

Luellen informed them that once again, the RV message had changed and it was now playing a song. He said an ATF agent later helped him identify it as "Downtown" by Petula Clark.

Soon, it changed again, the officers said. Detonation was three minutes away.

The RV had all of its windows covered, said Luellen, who had searched the outside for a license plate but found none. At one point, Wells said he saw a camera above the RV's rear-view mirror.

"It felt like whoever was behind it was watching," he said. "For me it felt weird. All the cop lingo that you hear about the spidey senses, about the hair standing up on the back of your neck. All that went through my body."

Wells went back to his vehicle to get heavy plates for extra protection. He started walking back toward the RV, he said, when, "I literally hear God tell me to go turn around and go check on Topping."

Topping was also walking toward the others, but she said something told her to change direction and walk toward Wells instead.

Then, she said, "I just saw the biggest flames I've ever seen, the biggest explosion. I just saw orange and ... felt the heat, the wave."

"I'll never forget the windows shattering after the blast all around me," she said. "It kind of looked like a big prop from a movie scene, all the glass breaking at once."

Luellen, who had just told a man walking his dog to get to safety, said he was knocked to the ground by the blast. Sipos, who was getting equipment out of his patrol car, was thrown into his trunk. Hosey was thrown forward, but caught herself.

Topping ran straight to Wells. They grabbed each other and ducked into a doorway for safety.

"I was so scared that I just lost my entire detail," she said.

'Christmas will never be the same'

Everyone was OK, though Wells suffered some temporary hearing loss in one of his ears, he said. Paramedics wanted to take him to the hospital, but when he heard three people were injured, he said, he told them to take the injured.

But there was still work to do.

Luellen, meantime, checked on the man with his dog, before checking on his fellow officers and running toward the debris. He found four more people exiting a building who the officers couldn't get in touch with initially, and told them to leave the area.

"I was just trying to make sure all of our people were OK, and then going from there," said Hosey. She turned her focus to keeping safe anyone who hadn't left the blast area or anyone returning.

"We just spent time keeping residents that had come outside as well as pedestrians l... keeping them away from the area," Sipos said.

But after their experience, Wells said he feels lucky to be alive, but also inextricably bound to his colleagues.

"The love for them is even bigger now," Wells said of his fellow officers. "Christmas will never be the same for any of us."