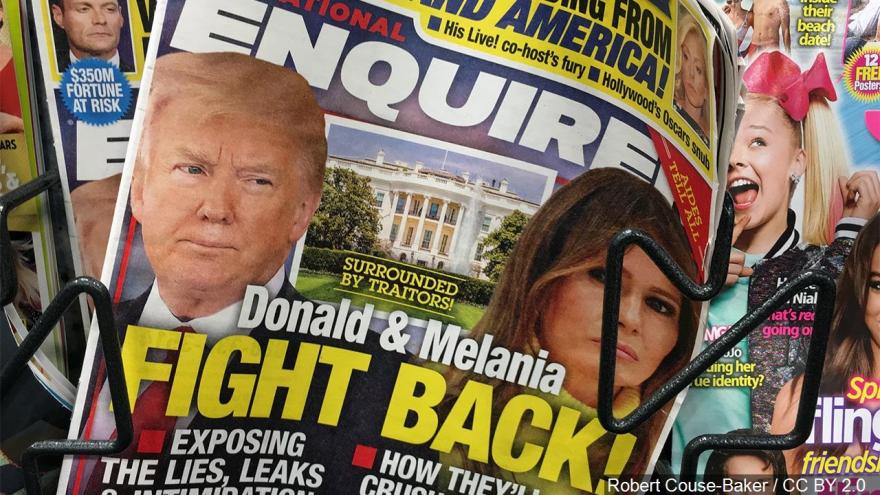 NEW YORK (AP) — The National Enquirer is being sold to the former head of the airport newsstand company Hudson News following a rocky year in which the tabloid was accused of burying stories that could have hurt Donald Trump's 2016 presidential campaign.

Tabloid owner American Media said Thursday it plans to sell the supermarket weekly to James Cohen. Financial terms were not immediately disclosed for the deal, which included two other American Media tabloids, the Globe and the National Examiner.

American Media said last week that it wanted to get out of the tabloid business to focus on its other operations that include its teen brand and broadcast platforms.

Federal prosecutors in Manhattan agreed last year not to prosecute American Media in exchange for the company's cooperation in a campaign finance investigation. That probe eventually led to a three-year prison term for Trump's former personal lawyer Michael Cohen for campaign violations among other charges.

American Media admitted it had paid $150,000 to keep former Playboy model Karen McDougal quiet about an alleged affair with Trump to help his campaign. Trump has denied an affair.

The sale would end a longtime relationship between the National Enquirer and Trump. Under the aegis of American Media CEO David Pecker, the tabloid has for years buried potentially embarrassing stories about Trump and other favored celebrities by buying the rights to them and never publishing in a practice called "catch-and-kill."

The Associated Press reported last year that Pecker kept a safe in the Enquirer's office that held documents on buried stories, including those involving Trump.

Whether James Cohen has any allegiances to Trump is not clear. While he was a registered Republican as late as 2017, according to Nexis records, he has given to both Republicans and Democrats. That included $17,300 in 2016 to an arm of the Democratic National Committee and $2,500 to the Republican National Committee in 2012.

News of the sale comes two months after Amazon chief Jeff Bezos publicly accused the National Enquirer of trying to blackmail him by threatening to publish explicit photos of him.

An American Media attorney denied the charge, but it threatened potentially big legal costs by upending American Media's non-prosecution agreement in the hush money case. The AP reported that federal prosecutors were looking into whether the publisher violated terms of the deal, which included a promise not to break any laws in the future.

The Bezos accusation comes at a difficult time for American Media. It has financed several recent acquisitions with borrowed money and has been struggling under a heavy debt load. American Media said the Cohen deal would help reduce the amount it needs to pay back, leaving it with $355 million in debt.

The Washington Post, which earlier reported the sale, said Cohen will pay $100 million in the deal.

Cohen's family had run a magazine and newspaper distributor for decades before his father branched into newsstand stores in 1980s, starting with a single one at LaGuardia Airport. Before he died in 2012, the father had opened more than 600 stores.

After the death, James Cohen's niece alleged her uncle had cheated her out of her inheritance. She lost the case.

The family sold a majority stake in the chain about a decade ago. The business is now owned by Dufry, an operator of duty-free stores in which James Cohen is a major shareholder.

Cohen still owns a magazine and newspaper distributor called Hudson News Distributors. In addition, he runs a real estate developer and a publishing company, which owns Gallerie, an art and design magazine.

Cohen has reportedly been involved in American Media deals before. The New York Times reports that, in 2011, Cohen invested in the company's American edition of OK!, a British tabloid.