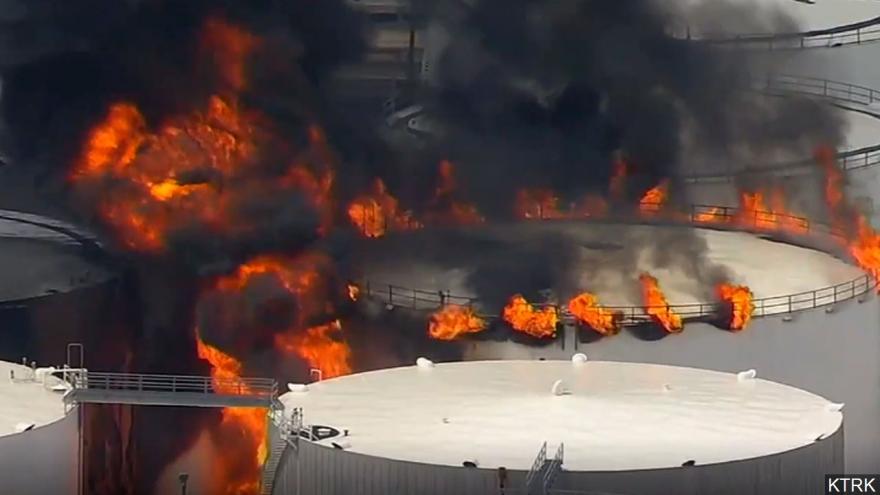 A Fire at a chemical storage facility in suburban Houston shut down schools and a state highway; the blaze spread to eight tanks containing gas, oil and chemicals., Photo Date: March 18, 2019 (Photo courtesy of MGN)

By JUAN A. LOZANO and DAVID WARREN Associated Press

HOUSTON (AP) — National Guard troops have been called in and residents were told to stay inside after elevated levels of benzene were detected early Thursday near a Houston-area petrochemicals storage facility that caught fire this week.

Harris County officials said the Guard and hazardous materials teams have established perimeters around the Intercontinental Terminals Company in Deer Park, which is about 15 miles (24 kilometers) southeast of Houston.

The Texas Environmental Protection Agency said Wednesday that benzene levels near the facility didn't pose a health concern. But authorities issued a shelter-in-place order Thursday following "reports of action levels of benzene or other volatile organic compounds" within Deer Park, according to the city.

The fire started Sunday, sending a huge, dark plume into the air for several days before crews extinguished the blaze on Wednesday. The fire spread to storage tanks holding components of gasoline and materials used in nail polish remover, glues and paint thinner.

Environmental groups said residents who live near the facility have experienced various symptoms, including headaches, nausea and nose bleeds. According to the Centers for Disease Control, long-term exposure to the highly flammable chemical causes harmful effects on the blood, including bone marrow.

The state Environmental Protection Agency conducted air quality tests throughout the Houston area, both on the ground and from a small airplane, and "measured no levels of hazardous concentrations," agency official Adam Adams said Wednesday.

But some residents who live near the storage facility said they didn't have confidence in the air quality test results.

"Everything has been wrapped up in this nice perfect bow in saying that there were no problems. Every air quality was perfect. Every wind was perfect blowing it away. And if everything was so perfect, why did it happen?" longtime Deer Park resident Terri Garcia said.

Bryan Parras, an organizer in Houston with the Sierra Club, said some residents who live near the facility have experienced various symptoms since the fire, including headaches, nausea and nose bleeds.

Parras said his environmental group had concerns not just about the air quality, but about potential impacts to the environment and the fishing industry if chemicals from the storage facility or foam used to fight the fire leaked into the Houston Ship Channel, which leads to the Gulf of Mexico.

"This issue isn't over just because the fire is out. We want systems in place that will protect our communities," Parras said.

The EPA and the Texas Commission on Environmental Quality said Wednesday that they were waiting for test results of water samples to determine any potential impacts from the foam used to fight the fire on waterways next to the storage facility, including the Houston Ship Channel.