National Guard will be deployed across Kentucky to help overwhelmed hospitals 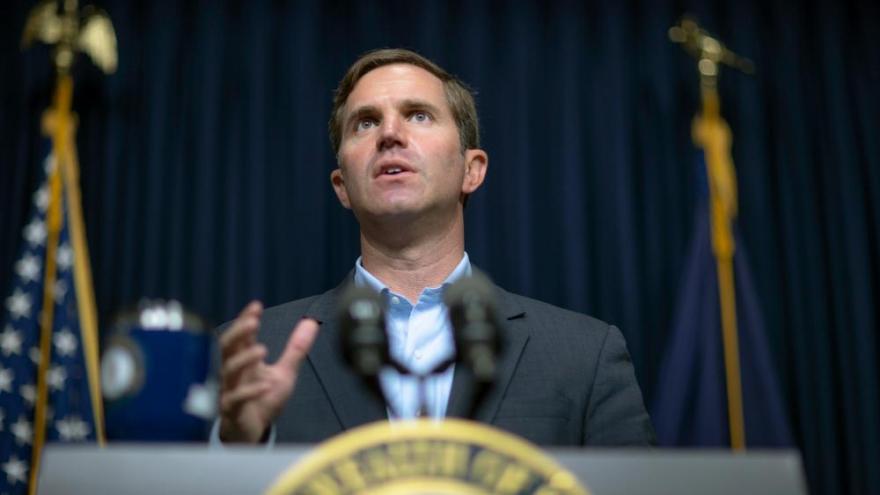 (CNN) -- Kentucky hospital officials high-fived one another during a news conference Monday as they learned multiple National Guard teams would be deployed to hospitals across the state dealing with rising Covid-19 cases and hospital staffing shortages.

Between 21 and 25 of the state's regional hospitals are at a critical staffing shortage stage, Kentucky Gov. Andy Beshear said in a news conference Monday.

"Covid is burning through our population here in Kentucky," Beshear said, adding that the state is coming off its third highest week of cases in the entirety of the pandemic.

Initially, five National Guard teams of 75 people will be deploying in two-week increments starting September 1, Beshear said. There will be other missions into the fall, including mobile vaccination teams, support for local health departments and continued food bank support, Beshear said. The governor said he also formally submitted a resource request for FEMA assistance.

"Our National Guard has answered the call each time during this pandemic, we appreciate them," Beshear said. "We're going to continue to work with them to provide support."

There were 2,596 new Covid-19 cases reported in Kentucky Monday, Beshear said. According to state health data, there were 1,893 Kentuckians hospitalized, with 529 patients in the ICU and 301 patients on ventilators as of Monday.

About 85% of the state's ICU beds are currently in use, more than a third of which are occupied by Covid-19 patients, according to the Department of Health and Human Services.

If cases and hospitalizations continue to accelerate over the next few weeks, Beshear said he would consider asking for or recommending a blanket mask mandate in the state.

"I would make the decision to do it, because we can't run out beds, we cannot run out of staff and hospital beds. The results are disastrous there because then we start losing people to heart attacks, strokes and car wrecks," Beshear said.

The governor said he rescinded the order "because of the court" after a federal judge temporarily blocked the order over the weekend.

US District Judge William Bertelsman temporarily blocked the order in light of a Kentucky Senate bill that says a governor cannot renew or continue an emergency issued from the same context unless they first get approval from the general assembly.

The motion was granted on the basis that Beshear did not seek the general assembly's approval before renewing an expired state of emergency, according to CNN's previous reporting.

Beshear said he was surprised by the court's decision and he believed he had the constitutional authority to enact the mandate based on a previous Supreme Court case.

The governor has expressed concern over the state's children facing the pandemic.

Last week, the state reported a record-high 18 children in pediatric ICU, "and there are only a couple hospitals that have a pediatric ICU," Beshear said.

'It's just a nightmare'

Dr. William Melahn, St. Claire Regional Medical Center's chief medical officer and vice president of medical affairs, said the Morehead, Kentucky, medical center's inpatient Covid-19 count doubled from 17 to 32 patients in the past week, and the curve appears to be getting sharper.

"What is historical is we currently have more critical patients than beds. So, we're in a temporary overflow intensive care unit," Melahn said. "Over half of our inpatient care right now is dedicated to Covid, so that's our situation."

Lerae Wilson, St. Claire's chief nursing officer and vice president of patient services, said they're looking to fill about 25 vacant nursing positions as the hospital is only staffed for 75 patients, but is receiving over 100.

"It's just a nightmare trying to staff," Wilson said. "It's not just Covid patients that we have in the hospital right now either, it's a lot of critically ill patients. So, when you throw Covid patients in on top of that, it makes it doubly hard to staff."