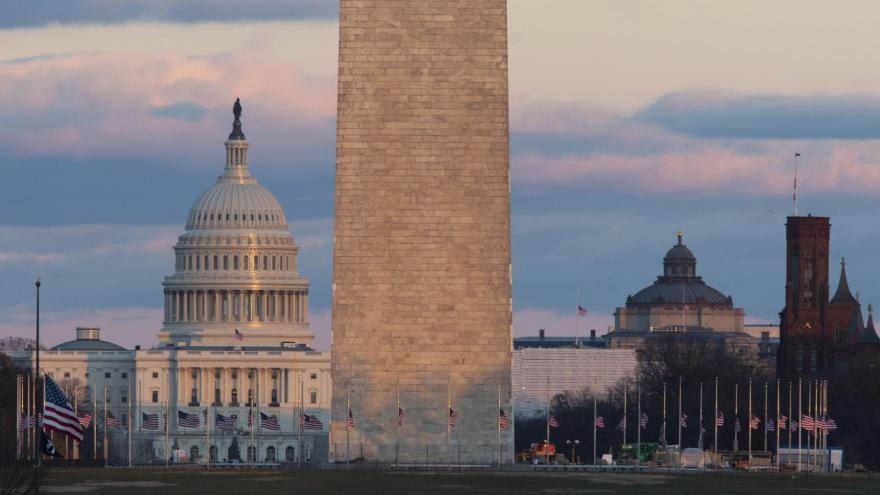 The National Mall will be closed on Inauguration Day due to security concerns. Seen here, the sun sets near the US Capitol on December 22, 2018 in Washington, DC.

(CNN) -- The National Mall will be closed to the general public on Inauguration Day due to security concerns, the National Park Service announced Friday.

The temporary public closure of the National Mall began at 11 a.m. ET on Friday and will extend through at least Thursday, January 21. The statement says protests will be allowed in designated locations and will be limited to those with permits.

"Demonstrations will be limited in number and participants will be screened prior to entry and escorted to their permitted location, in addition to other safety related requirements. Only those holding permits will be allowed within the closed area," the statement from the park service reads.

The statement reads, "The closure has been ordered to ensure safety and security within the area of the National Special Security Event designated by the Department of Homeland Security for the 59th presidential inauguration."

CNN previously reported that the National Mall would be closed to the general public on Inauguration Day due to security concerns, according to an official familiar with discussions.

The official said there will be no big screens, no toilets, no panels were people stand, and that the public will not be able to get down to the mall where traditionally thousands gather to watch the new president be sworn in.

President-elect Joe Biden and Vice President-elect Kamala Harris are still expected to take their oaths of office on the West Front of the US Capitol during a significantly scaled-down event on January 20. Biden said this week that he was "not afraid of taking the oath outside" and that his team had been receiving briefings in the wake of the violence.

Biden's advisers, who are helping plan the inaugural, say it is intended to be a virtual event. They did not object to heightened security restrictions recommended by authorities pertaining to the Mall or the area surrounding the White House.

The restrictions on the National Mall were first reported by the Washington Post.

Authorities are bracing for more extremist violence in the coming days after supporters of President Donald Trump stormed and breached the US Capitol last week in a deadly riot that left five people dead.

A senior official with Biden's inaugural committee said in a statement that the committee was "confident in our security partners who have spent months planning and preparing for the inauguration, including events on the National Mall."

Federal law enforcement agencies have issued an urgent call for assistance in securing the nation's capital as the inauguration nears, CNN has reported, warning that domestic extremists are likely more emboldened to carry out attacks on Biden's inauguration and throughout 2021 after seeing the success of last week's siege on the US Capitol.

On Wednesday, Biden received a briefing from senior officials at the FBI, the Secret Service and key members of his national security team about the potential for additional extremist violence in the coming days, according to the President-elect's transition team.

Biden had been planning to take the Amtrak to Washington next week to be sworn in as president, but those plans were scrapped amid the dramatically heightened security surrounding the inauguration, two officials familiar with the planning previously told CNN.

The US Secret Service on Wednesday officially took charge of security for Biden's inauguration, working in coordination with federal law enforcement agencies and the Pentagon.

This story has been updated with an official announcement by the National Park Service and additional information about the inauguration.