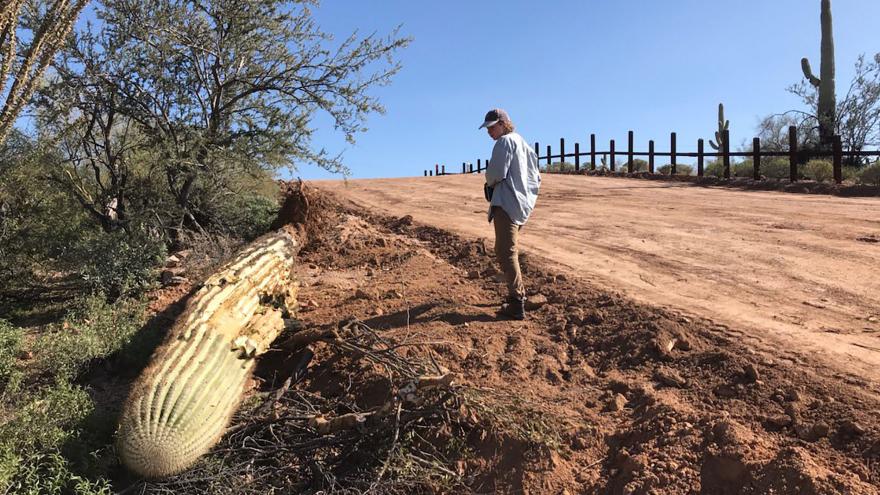 (CNN) -- Construction crews blowing up parts of a national monument to make way for the border wall could be on the verge of destroying sacred burial sites, an Arizona congressman who represents the area told CNN.

But Rep. Raúl Grijalva, an Arizona Democrat, said he's still hoping the crews will change course before it's too late.

"You can't replace these things. You can't fix them once they're gone," Grijalva said. "And as someone that grew up in the borderlands, it's painful to know that this is occurring."

Controlled blasts began inside Arizona's Organ Pipe Cactus National Monument last week, according to Ned Norris Jr., chairman of the Tohono O'odham Nation, which is adjacent to the monument. The blasting was first reported last week by The Intercept, a news site.

US Customs and Border Protection did not respond to CNN's inquiries about the explosions. In a statement to the Arizona Republic, the agency said blasts had started in the area.

"The controlled blasting is targeted and will continue intermittently for the rest of the month," CBP said, according to the Republic. "U.S. Customs and Border Protection will continue to have an environmental monitor present during these activities as well as on-going clearing activities."

Organ Pipe Cactus National Monument is a park that encompasses more than 500 square miles in southern Arizona, bordering the Mexican state of Sonora. On the National Park Service website, it's described as an International Biosphere Reserve with a "thriving community of plants and animals."

The Tohono O'odham Nation is a federally recognized tribe with about 28,000 members on tribal lands in southwestern Arizona.

Grijalva said the blasting occurred last week in an area known as Monument Hill, a place where he said Apache warriors who battled with the O'odham were laid to rest.

"It's a political agenda, without worrying about consequences that could happen in terms of these sacred sites," he said.

"We hope that by putting some level of public light on this issue, it forces Homeland Security to think twice. It's all within their discretion," he said. "If they decide to do it differently, it can be done differently."

The Trump administration has waived environmental laws and other regulations to expedite border wall construction. Officials have said they "remain committed to environmental stewardship" as construction moves forward.

"This mountain (Monument Hill) is a sacred site to the O'odham and other indigenous people," he said. "And it's quite literally being blown up so Trump can build the border wall across this mountain. ... It's just heartbreaking to watch."

At another site in Organ Pipe last month, he said, bulldozers flattened cacti in what he described on Twitter as "horrific destruction."

Norris, the Tohono O'odham chairman, accused US federal officials of violating their own policies by moving forward with construction without holding "meaningful consultations."

"The Tohono O'odham Nation is adamantly opposed to the construction of the 30-foot, fortified border wall, which would irrevocably harm cultural sites, sacred sites and the environment," Norris said. "Media reports that explosives are now being used further demonstrates the massive and unnecessary destruction the wall is inflicting."