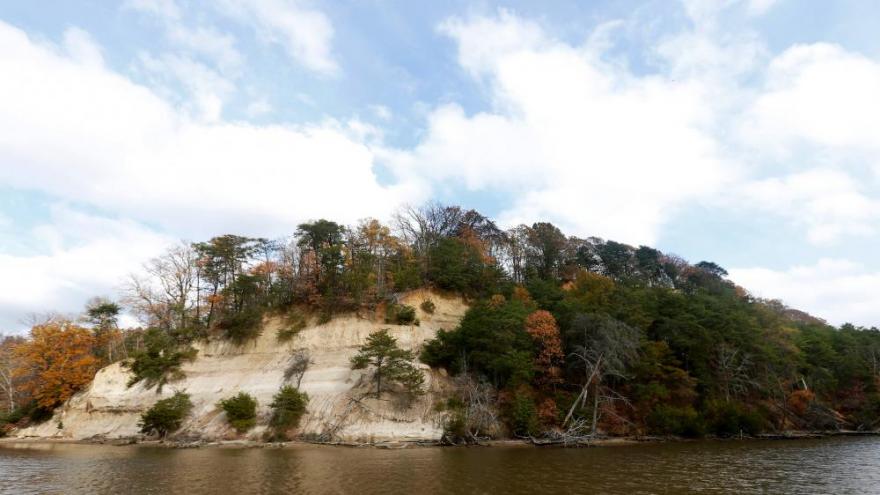 The Rappahannock Tribe, a Native Tribe in Virginia, has re-acquired 465 acres of sacred land at Fones Cliff.

(CNN) -- The Rappahannock Tribe, a Native Tribe in Virginia, has reacquired 465 acres of sacred land at Fones Cliff.

Secretary of the Interior Deb Haaland and US Fish and Wildlife Service Director Martha Williams celebrated the tribe's reacquisiton of the land Friday, according to a press release from the Department of the Interior.

"We have worked for many years to restore this sacred place to the Tribe," said Rappahannock Tribe Chief Anne Richardson, according to the Chesapeake Conservancy. "With eagles being prayer messengers, this area where they gather has always been a place of natural, cultural and spiritual importance."

Fones Cliff is the ancestral home of the tribe, located on the eastern side of the Rappahannock River in Virginia. The area, located inside the Rappahannock River Valley National Wildlife Refuge, will be publicly accessible and placed in trust with the Bureau of Indian Affairs. The Tribe plans to educate the public about their history by constructing a replica 16th-century village and expand their "Return to the River" program, which trains Tribal youth in traditional river knowledge and practices.

"The Department is honored to join the Rappahannock Tribe in co-stewardship of this portion of their ancestral homeland. We look forward to drawing upon Tribal expertise and Indigenous knowledge in helping manage the area's wildlife and habitat," Secretary Haaland said in the statement. "This historic reacquisition underscores how Tribes, private landowners, and other stakeholders all play a central role in this Administration's work to ensure our conservation efforts are locally led and support communities' health and well-being."

The cliffs play a central part in the history of the tribe. In 1608, the tribe first encountered and defended their homeland against English settler Captain John Smith, who played an important role in the first permanent English settlement in America at Jamestown, Virginia. In the 1660s, the tribe began to be forcefully displaced from their homeland on the Rappahannock River by the English, according to the Chesapeake Conservancy.

In addition to their cultural and historical importance to the tribe, the cliffs are also crucial to wildlife: The site is home to one of the largest nesting populations of bald eagles on the Atlantic coast, according to the Department of the Interior..

The tribe's reacquisition of its land was made possible by the family of William Dodge Angle, who provided the funds necessary for the Chesapeake Conservancy to purchase the 465 acres and donate the fee title to the Rappahannock Tribe. Additional funding also came from a grant from the National Fish and Wildlife Foundation through Walmart's Acres for America Program, according to the conservancy.

The acquisition follows a growing movement of Indigenous people fighting to reclaim their land.

In 2019, the Wiyot tribe successfully reclaimed their ancestral homeland of Duluwat Island on the northern coast of California after over a century of displacement. And earlier this year, more than 500 acres of California forests were returned to a group of Native American tribes.