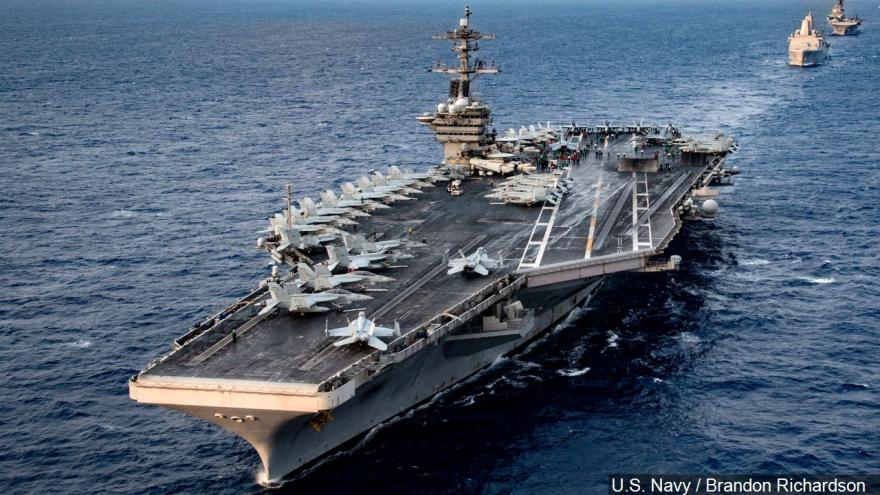 (CNN) -- The US Navy and the Centers for Disease Control and Prevention have launched an investigation into the coronavirus outbreak aboard the USS Theodore Roosevelt aircraft carrier that has left one sailor dead and saw nearly 700 other crew members test positive for the virus.

The inquiry will look to establish the origin of the outbreak and understand how it spread rapidly on board the ship.

The Roosevelt's commander Capt. Brett Crozier was fired earlier this month for what then-acting Navy Secretary Thomas Modly said was poor judgment for too widely disseminating a warning about the spread of virus aboard his vessel, a warning that eventually made its way into the press.

Modly resigned days later over his handling of the incident, actions that included a $240,000 trip to Guam where he slammed Crozier and admonished sailors for giving their former commander a rousing sendoff in public remarks to the crew.

The results of a separate Navy investigation into the circumstances of Crozier's memo is expected soon and it is possible Crozier could be reinstated.

"This is a stealthy virus in many ways and this outbreak investigation is an important medical weapon to understand its behavior so that we can better protect the crew, their shipmates on other vessels and ultimately the nation," Rear Adm. Bruce Gillingham, the US Navy surgeon general, said on Friday.

To carry out the investigation, crew members are being asked on a voluntary basis to complete a survey and provide two new specimens -- blood and nasal swabs -- for laboratory testing, according to the Navy. It hopes to get 1,000 volunteers which is what it believes is needed for representative sampling.

"One of the reasons we do the questionnaire is to try to connect the dots. When you combine that questionnaire with the serology and the nasal swabs, we begin to get a picture of how the disease was transmitted throughout the crew, or at least in a pattern," a Navy official told CNN. "The questions on the questionnaire ask about previous health history, locations where sailors live and work and known exposure to Covid cases. These will be used to help connect the dots regarding shared exposure on the ship and development of antibodies in response to this exposure."

While the military would routinely conduct a medical investigation of any outbreak of infectious disease, understanding the rapid spread on the Roosevelt is a top priority for senior military officials. The carrier may prove to be a unique laboratory for understanding how the virus transmits and how to control its spread.

"We have had significant numbers on the Roosevelt who originally tested negative and later tested positive, so there is a timing factor there," said Gen. John Hyten, the vice chairman of the Joint Chiefs of Staff.

Looking ahead across the military, the Pentagon believes if they quarantine people in small groups and then test them after 14 days, it will "give us high confidence" service members are healthy and can be deployed.

Military medical investigators are also examining numerous cases where sailors who at first were asymptomatic later exhibited symptoms. Officials calculate that approximately 10% of the positive cases on the carrier originally tested negative.

"It has appeared that pre-symptomatic transmission has been a factor of transmission aboard. That is truly one of the secret weapons of this virus. Individuals can transmit before they know they have it," Gillingham said. "It probably passed through quite freely, and was initially unrecognized."

The Navy currently assesses that the first cases of the virus originated with the aircraft carrier's air wing.

"We don't know for sure how the virus got started. Certainly there's evidence to suggest since the first two sailors who tested positive, that was at day 15 following their port visit, we also know that those sailors were from the aircrew portion of the crew," Gillingham told reporters on Friday.

While Gillingham later said that he did "not personally have knowledge about the initial individuals," a Navy official later confirmed to CNN that the first two cases were among the ship's air wing. The air wing is responsible for operating the fighter jets, helicopters and other aircraft on board the carrier.