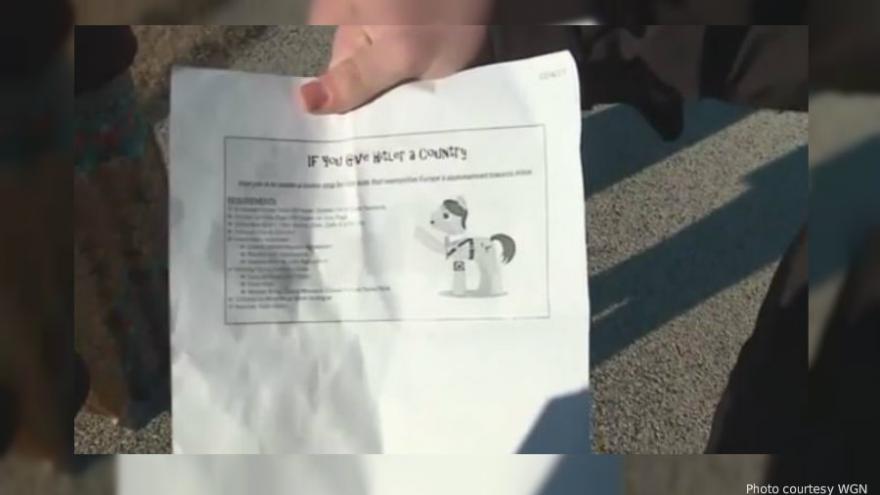 Gurnee, Illinois (WGN) -- Parents are raising questions about a controversial homework assignment about Hitler at a suburban school. "Everyone in the class was given the paper and it tells you all the directions and requirements," said Michael Masterton, an 8th grader at Woodland Middle School in Gurnee.

He said students in his language arts class were given the assignment this week called “If You Give Hitler a Country,” with instructions to “create a comic strip for little kids that exemplifies Europe’s appeasement towards Hitler.”

Michael’s mother, Kelly Masterton, said she was “flabbergasted” when she saw the assignment. He turned in comic strips featuring images of cartoons and swastikas.

"I asked him, 'did you ask the teacher if you could use these images?' and he said yes," she said. "[I'm] not sure what the appropriate manner is to use a swastika."

Kelly posted the picture of the assignment on her Facebook page, sparking speculation among many other parents about what the teacher was thinking. The school district is investigating.

"I don't think she did it on purpose to be anti-Semitic. I think she was trying to teach that there was propaganda...It did not come through the assignment that way," Kelly said.

In a letter to parents, school officials say the "objective of the lesson is in alignment with district curriculum:"

However, the "fun" and "cartoonish" elements of the activity students were asked to complete did not fully represent the intent of the teachers or of Board Policy...The intent of the student activity was to help students understand the complex issues leading up to World War II, not to minimize the atrocities of Nazi Germany.

The district apologized for any concern this caused members of the community, but would not comment on whether any teachers were disciplined.