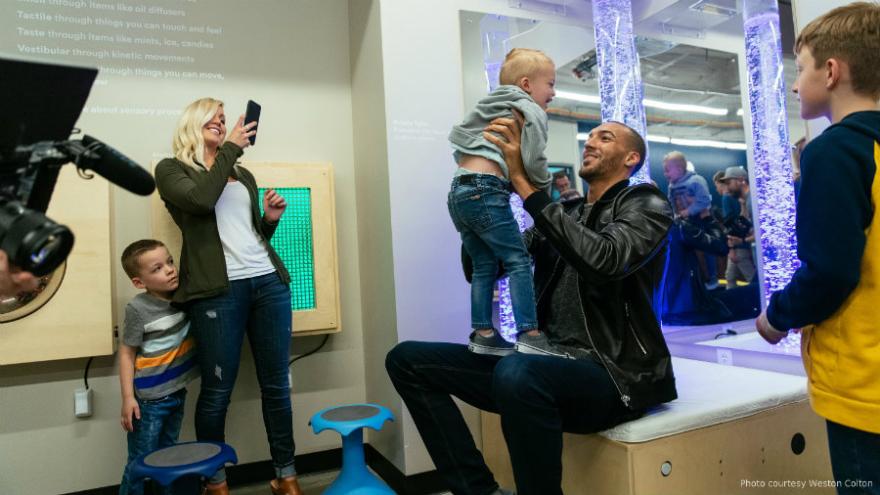 (CNN) -- When crowds of noisy fans pack sports and entertainment arenas, many people go expecting -- even hoping -- to experience some sort of sensory overload.

But for families with children on the autism spectrum, it's difficult to enter an oftenrowdy, overpowering environment without worrying about the kids. For some, it's virtually impossible.

It's a challenge that's now being addressed by the NBA.

A "sensory room" designed for children with autism spectrum disorder and other intellectual and developmental disabilities will open at Salt Lake City's Vivint Smart Home Arena, home of the Utah Jazz, on Friday. The event will be a feature of Autism Awareness Night at the venue.

The creation of the space makes the Jazz the fourth pro basketball team with a sensory room; the Cleveland Cavaliers, the Sacramento Kings and the Oklahoma City Thunder also have these rooms. The new space is part of a partnership between Vivint Gives Back and the Jazz.

The NBA is partnering with nonprofit KultureCity to make 19 arenas "sensory-inclusive" by the start of the 2018-19 season this fall. The arenas include the homes of the Chicago Bulls, Los Angeles Lakers and Miami Heat, according to the league.

"For children that have autism or sensory processing disorders, going to a venue is pretty overwhelming for their senses," said Holly Mero-Bench, director of the Vivint Gives Back program.

"Imagine if your life was like being on the front row of a rock concert. It would be pretty challenging going about your day-to-day life -- let alone to a basketball game where things are loud and chaotic."

Wendy Fournier, president of the National Autism Association, said it's quite common for individuals with autism to be overwhelmed by sensory input such as bright lights, loud sounds, big crowds -- or a lot of people talking or shouting at once. They need a space to get away from all the input, some quiet time to regulate themselves.

The sensory room initiative was born out of a frightening and frustrating night for one family with a child who has autism.

In February 2016, Cleveland's Quicken Loans Arena was holding an autism awareness night at a hockey game. Jeff Belles and his wife, Amy, had never taken their son Carson, 13,to a live game. They watched them at home on TV.

But because Carson's school was going to the event and other parents with children on the autism spectrum and therapists would be attending, "we thought this would be a great opportunity to give it a try," Jeff said.

Carson is non-verbal, so he uses a speech device to communicate.

The boy was going through security when his speech device set off a metal detector. A security guard told the Belles that their son would have to take it off to continue. As Jeff began to take off the device, Carson started headbutting him.

The security guard yelled something along the lines of "you get a hold of that kid," the parents said, deeply upsetting them.

The family stayed for the game, but "there was no autism awareness at an autism event," Jeff said.

After the Belleses shared their story on social media, they received a call from officials at the arena. The venue's senior vice president of facility operations, Antony Bonavita, has a son with autism and was upset about how security staff handled the situation.

It was Bonavita who began the partnership with KultureCity to make the arena more accessible and accepting. That led to staff receiving training and the provision of "sensory bags," with headphones and fidget toys for guests. The first sensory room in a US sports facility opened at the arena in March 2017, Bonavita said.

The Belleses' story is one many families might recognize.

According to the US Centers for Disease Control and Prevention's Autism and Developmental Disabilities Monitoring Network, about one in 68 children has been identified with autism spectrum disorder.

Duane and Danielle Howell have four children, three of whom are on the autism spectrum. Harrison, 16, is the big basketball follower in the Howell family and is a huge fan of the Thunder. Last summer, he broke a kneecap pretending to be Thunder point guard Russell Westbrook.

Danielle said the family tried going to an NBA game a few years back but had to leave because of the noise levels.

Jim Deal, an Oklahoma City Thunder season-ticket holder, loves taking his three grandkids to games. The second-oldest, 14-year-old Jimi Scott, has autism spectrum disorder. Jimi and his brother Marley are fans of the Thunder's Paul George. They once went to the airport just hoping to see him getting off a plane, Deal said.

But attending games with Jimi can be challenging because of the noise. The loud explosions of the pyrotechnics set off at the beginning of the game have forced them to leave their seats and go to the concourse.

Designing and building a sensory space involves intensive research and planning. Experts on sensory processing and autism are consulted and offer suggestions on how each component of the space can be built to calm or stimulate a different sense. The lights are low, colors are soft, and sounds are soothing.

"It is just a peaceful, quiet place to get away from the arena," Deal said.

Vivint Gives Back's Mero-Bench shared a story about one girl who was having trouble connecting with others but was able to connect with Jazz player Rudy Gobert by sitting down at the storytelling tree and telling a story with velcro puppets.

There are also relaxing spaces such as quiet cubbies or sensory cubbies that allow children and their families alone time.

"Sensory rooms aid in both calming and stimulating the senses for individuals with intellectual and developmental disabilities," said George Ballew, a licensed clinical social worker and clinical director of the Peers Academy at the Heritage Treatment Center, who consulted Vivint on the design of the room.

"This helps them cope with situations and environments where it may be difficult for them to remain happy and productive, such as a professional basketball game and other arena events."

The sensory rooms have been welcomed by parents and children alike. "It is not necessarily geared just to children or just to autism," Bonavita said.

"It is a space that is available for any of our guests to go and have an opportunity to regulate or have some quiet time."

It's much more than that for the Howells.

"When first told that my wife and I were to be expecting triplet boys, my childhood memories took over," Duane Howell said. "Thoughts of being a father filled my head. When your children are born, you have hopes and dreams for them. You have a list of things you want to help them experience. When you receive their diagnoses, you throw away that list and begin the process of panic."

The Thunder's sensory room gave Howell the opportunity to "start a new list. It has allowed me to have an experience as a father I thought never to be possible."

"It gives us a sense of options instead of, 'oh, if things get tough, we are just going to have to head out'; we have the option to stay," Danielle Howell said.

"A lot of people and a lot of families are affected by autism and to accommodate this particular developmental disability is accommodating literally millions of families," the National Autism Association's Fournier said.