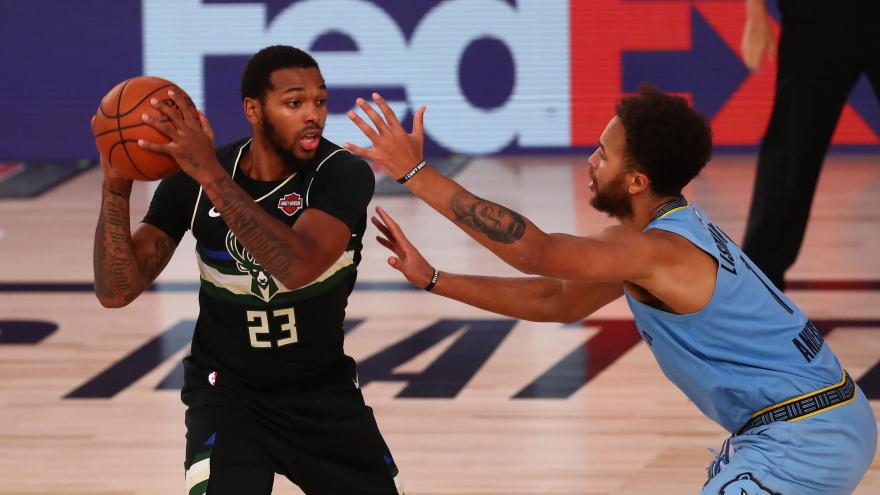 (CNN) -- The NBA announced Wednesday it will postpone Game 5 of three different series in response to the Milwaukee Bucks decision to boycott their playoff game following the police shooting of Jacob Blake in the team's home state of Wisconsin.

Blake, a Black man, was shot in the back by police on Sunday as he tried to enter his vehicle in Kenosha, Wisconsin. His shooting became the latest incident to prompt outrage nationwide over racial injustice and police brutality.

"The NBA and the National Basketball Players Association today announced that in light of the Milwaukee Bucks' decision to not take the floor today for Game 5 against the Orlando Magic, today's three games -- Bucks vs. Magic, Houston Rockets vs. Oklahoma City Thunder and Los Angeles Lakers vs. Portland Trail Blazers -- have been postponed," the NBA said in a statement. "Game 5 of each series will be rescheduled."

The Bucks game against the Orlando Magic was scheduled to begin at 4 p.m. at Disney World in Orlando. The Bucks did not emerge from their locker room before the scheduled tip. The game broadcast on NBA TV reported the players sat out in protest.

"Some things are bigger than basketball," Bucks senior vice president Alex Lasry wrote on Twitter. "The stand taken today by the players and org shows that we're fed up. Enough is enough. Change needs to happen. I'm incredibly proud of our guys and we stand 100% behind our players ready to assist and bring about real change."

Strikes are banned under the NBA's collective bargaining agreement, which means the Bucks players broke their own contract in order to protest racial injustice and police violence.

In a statement, the Orlando Magic supported the league's decision.

"Today we stand united with the NBA Office, the National Basketball Players Association, the Milwaukee Bucks and the rest of the league condemning bigotry, racial injustice and the unwarranted use of violence by police against people of color," the Orlando Magic said in a statement.

Several players were asked about the possible boycott over the last 24 hours. Many said it was being discussed.

But this is not the first time NBA players have been vocal about racial injustice.

NBA players from multiple teams have voiced their opinion that not enough is being done about police killings and racial injustice nationwide.

Throughout the season, many players have dedicated their post-game interviews to Breonna Taylor, a 26-year-old EMT was shot multiple times in March by police.

Milwaukee Bucks forward Sterling Brown is suing the city of Milwaukee, the city's police department and eight sergeants or officers after an incident that took place on January 26, 2018.

Brown double parked his vehicle in the parking lot of a Walgreens, and ended up being tased, stepped on and thrown to the ground by police.

According to Brown, he was offered a $400,000 settlement from the city, which he rejected.

"The city of Milwaukee wanted to give me $400,000 to be quiet after cops kneeled on my neck, stood on my ankle, and tased me in a parking lot," Brown wrote on The Player's Tribune in July. "But here's the thing: I can't be quiet. I rejected the offer because I have a responsibility to be a voice and help change the narrative for my people. In order to do so I have to tell my story, so dialogue and conversations about police brutality can help influence and change a corrupt system. It goes deeper than me just illegally parking."