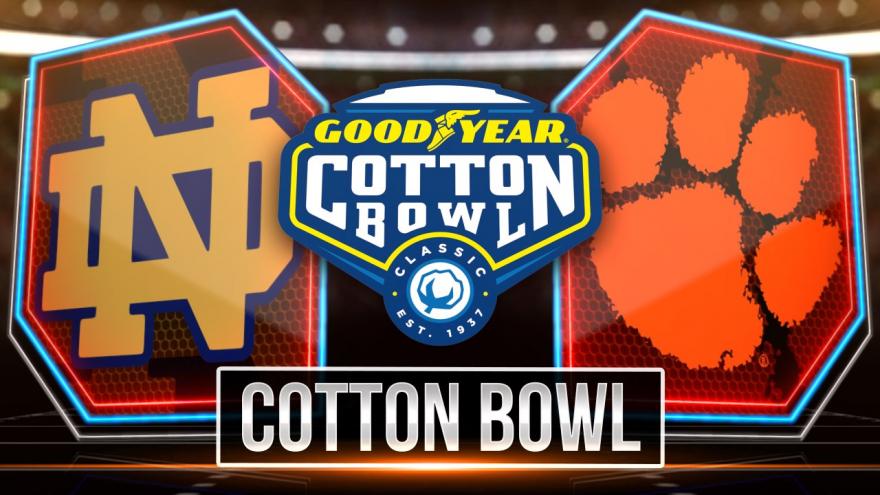 DALLAS (AP) — Clemson defensive tackle Dexter Lawrence will not play against No. 3 Notre Dame in the Cotton Bowl after the NCAA confirmed a suspension Thursday for a failed test for performance-enhancing drugs, possibly ending the talented junior's college career.

Lawrence is one of three Clemson players who tested positive for ostarine, a substance used to treat osteoporosis that can act like an anabolic steroid. The usual NCAA suspension for a failed PED test is one calendar year.

Earlier Thursday, Lawrence participated in No. 2 Clemson's College Football Playoff media day session at AT&T Stadium and said he has no idea what may have led to the failed test. Lawrence was holding out hope additional testing by the NCAA would lead to the suspension being lifted.

But in a statement, Clemson athletic director Dan Radakovich says the NCAA confirmed the suspensions of Lawrence and two reserves.

"The athletic department will have no further comment on the matter this evening as it considers all of our options, including appeals," Radakovich said.

Media day for both CFP semifinals were held simultaneously with No. 1 Alabama and No. 4 Oklahoma meeting with reporters at the Orange Bowl in South Florida. Lawrence's status has been the lead story going into Saturday's games.

Clemson coach Dabo Swinney announced earlier in the week the school had been notified by the NCAA about the failed tests by Lawrence, reserve offensive tackle Zach Giella and freshman tight end Braden Galloway.

Lawrence's appearance at the home of the Dallas Cowboys in Arlington, Texas, on Thursday morning was something of a surprise. Like the most of the other starters, he had a small table set up for him with a name card. He sat and answered questions for most of the 45-minute session, but the crowd of reporters thinned after about 20 minutes.

Lawrence, a likely first-round draft pick if he enters the 2019 draft, said he would never even think about purposely taking something like that.

"I'm not the type of guy to do a selfish act like that, I have too much pride," Lawrence said. "I love this team and my family too much to even think about putting a substance like that in my body. I don't know where it came from. I don't know how it got there."

Lawrence has been attending practice and doing some drills, but not taking repetitions with starters. He has 7 1/2 tackles for loss this season and is one of the best run defenders in the country.

"I want to say right now I'm at peace. I know that I have no control on what the 'B' sample result will be," Lawrence said. "I'm just here to support my teammates and just try to be the leader and starter I've been all year."

Alabama also had three players suspended for its game, but did not provide details as to why. Alabama coach Nick Saban said starting left guard Deonte Brown, tight end Kedrick James and offensive lineman Elliot Baker committed an NCAA violation and would not play again this season. None of the players made the trip to Miami with the team.

The news in South Florida was Oklahoma quarterback Kyler Murray being in attendance at media. The Heisman Trophy winner missed media availability on Wednesday because he was not feeling well, though he did practice.

Murray was coughing and sniffling a bit, but said there was no doubt he would play Saturday.

Notre Dame coach Brian Kelly confirmed that Brandon Wimbush has taken the steps necessary to transfer. The quarterback's name is in the transfer database, but no final decision has been made.

Wimbush declined to talk about what he has told Kelly about his future, but did acknowledge he has decisions to make about his future after the season. Wimbush would be a graduate transfer and eligible to play immediately next season.

"We're a couple days away from this game and I don't want anything to be a distraction," said Wimbush, who started the first three games of the season before losing the job to Ian Book. "I'm excited for what's to come and what lies ahead and I have a year of eligibility left. I'm excited to fulfil that."

Alabama's Jalen Hurts, the Tide's starter for the last two seasons before Tua Tagovailoa won the job this year. Hurts could also be a graduate transfer with immediate eligibility.

"My story's still unfolding. Just have to see what's up next," Hurts said.