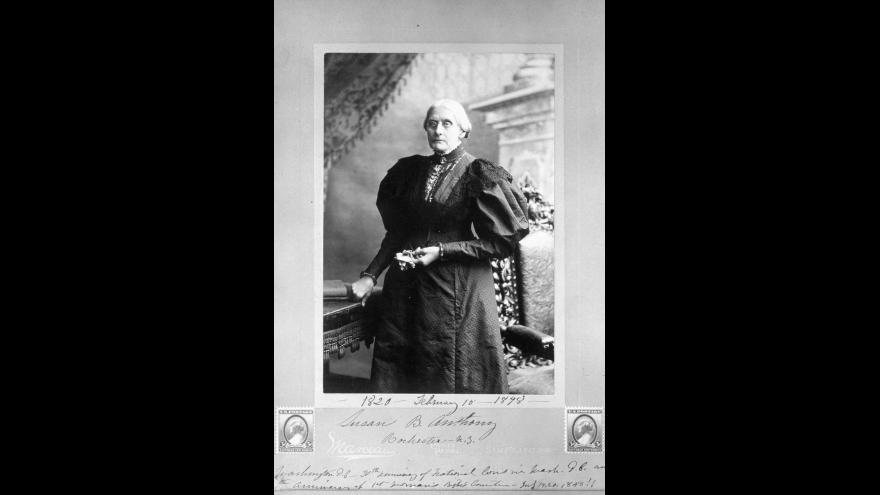 Susan B. Anthony received a presidential pardon this week, almost 150 years after she was arrested and convicted for voting as a woman.

She died before women secured the right to vote, but she found a way to vote anyway, 50 years before the 19th Amendment passed. She was eventually arrested and convicted for casting her vote.

Almost 150 years later, Anthony is getting the kind of recognition from the federal government she would've scoffed at during her life.

On Tuesday, President Donald Trump announced he will pardon the defiant suffragist on the 100th anniversary of the 19th Amendment, which guaranteed women the right to vote. Anthony is perhaps the best-known leader of the women's suffrage movement.

She knew it was illegal to vote but did it anyway

Anthony proudly cast her vote in the 1872 election in Rochester, New York, though it was still illegal for women to vote at the time.

Poll workers questioned her credentials. She demanded they register her. An election official asked her if she was a US citizen, if she lived in the district she was voting in and whether she had accepted a bribe for her vote. Her answers satisfied the official, so she was allowed to vote, according to the National Archives.

Over a week later, Anthony and 14 other women who voted with her in New York were arrested and charged with voting unlawfully.

Anthony refused to accept different treatment because of her gender. According to historian Ann D. Gordon, a deputy federal marshal asked Anthony to "accompany him downtown" for her arrest.

"Is that the way you arrest men?" she asked. When he told her it wasn't, she demanded that she "be arrested properly."

Before her trial, Anthony traveled around 29 towns and gave her stump speech, "Is it a crime for a US citizen to vote?"

She called it "downright mockery" to speak of the liberties American women enjoyed at that time while they were "denied the use of the only means of securing them" by the government -- in other words, women weren't feeling very liberated when they couldn't vote.

She may not have wanted a pardon

By all accounts, Anthony wore her acts of rebellion as badges of honor that furthered her goal of women's suffrage. Some contemporary officials believe she wouldn't have wanted a pardon.

"She was proud of her arrest to draw attention to the cause for women's rights, and never paid her fine," Hochul tweeted Tuesday. "Let her Rest in Peace, @realDonaldTrump."

Anthony refused to submit to the men who convicted her. At the end of her two-day trial, which she called the "greatest judicial outrage history has ever recorded," Anthony was ordered to pay a fine of $100 -- of which she told the judge who sentenced her she'd "never pay a dollar," according to Library of Congress archives.

She concluded her trial with a maxim she urged all women to hear: "Resistance to tyranny is obedience to God."

Voting wasn't accessible to all women even after the amendment was passed, though. The women's suffrage movement as helmed by Anthony and Elizabeth Cady Stanton excluded Black women as the White leaders distanced themselves from Black activists. Civil rights leaders like Ida B. Wells and Mary E. Church Terrell received wider recognition for their work for suffrage after their deaths.

Black women and women of color marched for suffrage but often weren't included by the White leaders of the movement. As a result, Black women faced additional challenges to voting even after the 19th Amendment passed.

Obstacles to voting for Black Americans persisted in the century after Anthony's trial, too. Poll taxes, grandfather clauses and literacy tests were imposed after the 14th Amendment granted citizenship to African Americans.