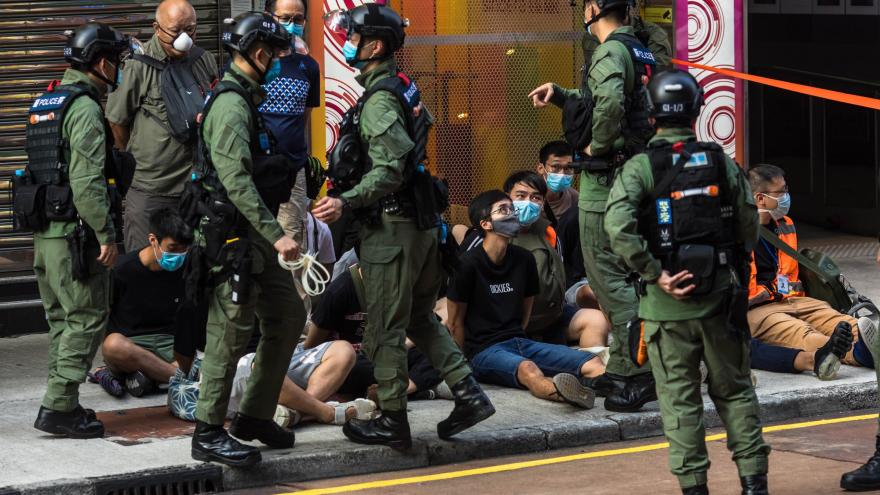 (CNN) -- Nearly 300 protesters were arrested in Hong Kong Sunday, according to the city's police force.

The remaining people were arrested "on suspicion of attacking police officers," loitering and obstructing police from performing their duties, the statement added.

The protesters were arrested in the Hong Kong neighborhoods of Yau Mai Tei and Mong Kok.

Earlier on Sunday afternoon large crowds gathered at Yau Mai Tei, rallying and shouting at a prohibited group gathering. Local elections were supposed to be held Sunday but the government has postponed them for at least a year due to the pandemic.

The officers used pepper spray against those demonstrating and multiple people were detained at the scene, with some arrested by plain-clothed police officers.

Meanwhile, at least one of the people detained in the Yau Mai Tei neighborhood was arrested for shouting pro-independence slogans.

Hong Kong police earlier said they issued several warnings to those gathered at Yau Mai Tei and asked them to disperse but some people continued to assemble.

Elsewhere, a pro-democracy activist was arrested at home on Sunday morning, for allegedly "uttering seditious words."

Tam Tak-Chi, 47, was arrested at his home in the Tai Po District Sunday, according to Hong Kong's police force.

Senior Superintendent Steve Li Kwai-Wah with the National Security Department branch of Hong Kong's police said Tam is accused of giving anti-government talks at booths he allegedly set up on the street in the Kowloon area.

The activist is also accused of posting seditious material on Facebook.

Police reiterated on Sunday that attending prohibited group gatherings was an illegal act, as was any attempt at unauthorized assembly, adding that such acts also seriously increased the risk of spreading coronavirus.

Hong Kong has been gripped by political unrest since June 2019, when anti-government protests broke out in the city. Many demonstrators oppose Hong Kong's pro-Beijing government.

The crisis shows no sign of abating but coronavirus halted the opportunity for public assembly in 2020.

Beijing subsequently imposed a new national security law on the city in June, before the unrest could resume.

The law, which bypassed Hong Kong's semi-democratic legislature, bans subversion, secession and collusion with foreign forces, with severe prison terms for anyone found in contravention.