Nearly a dozen states enacted laws this year that could subvert the results of future elections, analysis finds 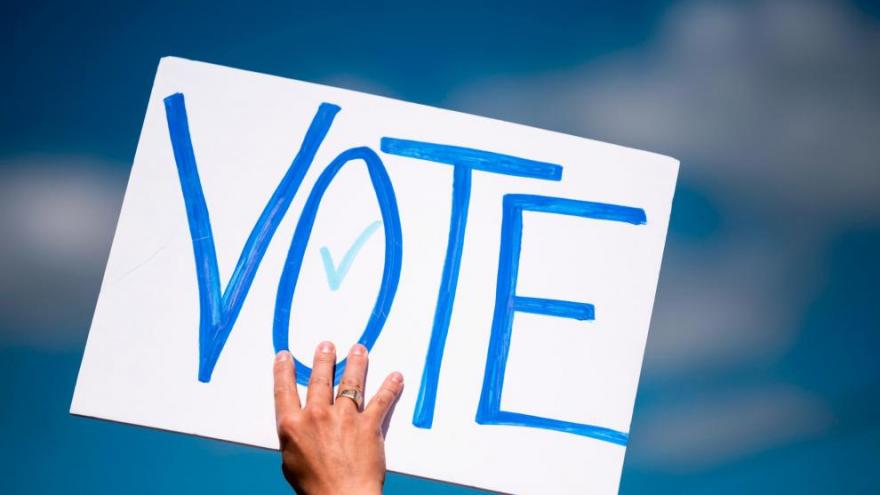 Nearly a dozen states enacted laws this year that could subvert the results of future elections, an analysis finds. A man holds a sign that says "VOTE" on August 17, 2020 in Mankato, Minnesota.

(CNN) -- Nearly a dozen states have enacted laws this year that pave the way for election subversion, and additional proposals are gaining momentum in other states, according to a new tally by a nonpartisan group that tracks election-related bills.

The Voting Rights Lab analysis identified several categories of election subversion legislation, ranging from laws that usurp the authority of election officials or threaten them with criminal sanctions to the moves in several Republican-led states to undertake partisan reviews of the 2020 election results.

The group's new report, shared first with CNN, tracked more than 180 bills introduced this year that have sought to shift authority away from election administrators, following former President Donald Trump's loss and his relentless and unsuccessful crusade to overturn the election's results in several battleground states.

"Enough states are starting to move these policies that we are, in fact, at a tipping point," Megan Lewis, the executive director of the Voting Rights Lab, told CNN. "These lawmakers need to stop these efforts or we really run the risk of eroding the fabric of our democracy."

The report comes as the former President and his allies, as they continue to push the false narrative of widespread fraud, are demanding more so-called "audits" of election results -- even after a partisan review of ballots in Arizona released last week reaffirmed President Joe Biden's 2020 win in the state's most populous county. Similar Republican-led reviews of last year's election results are moving forward in Wisconsin and Pennsylvania, two other swing states Biden flipped from red to blue last year.

The Voting Lab identified 17 new laws in 11 states that could undermine how elections are run.

They range from a new law in Arizona that threatens election officials with felony prosecution if they send mail ballots to voters who did not request them to one in Montana that requires legislative consent to change voting procedures. (The bill's GOP sponsor previously told CNN the measure was needed to avoid a repeat of the 2020 election, when the state's then-Gov. Steve Bullock, a Democrat, gave counties the choice to conduct voting entirely by mail to help limit the spread of the coronavirus.)

The Voting Rights Lab said other proposals that pave the way for partisan interference gained traction during legislative sessions this year -- with 35 bills passing at least one chamber in 15 states.

In Texas, for instance, the state Senate earlier this month passed a bill to allow candidates and party leaders to trigger mandatory reviews of election results. It was not considered in the House. But last week, Trump wrote to Texas Gov. Greg Abbott, demanding he revive the the latest version of the bill by adding it to the agenda of an ongoing special session.

Within hours of Trump's letter, a release from the Texas secretary of state's office appeared to fall in line -- saying that audits had already begun in four large counties.

County officials, however, told CNN they were in the dark about the audit plans. And on Monday, a top county attorney in Harris County -- one of the counties targeted and home to Houston -- sent a letter to the secretary of state's office, asking for proof of the audit and any documents related to it.

Voting Lab analysts say they expect further battles over so-called "audits" and control of election procedures when more state legislatures convene next year. Already, a bill filled in Florida's Republican-controlled legislature calls for third-party reviews of the 2020 results in each precinct of every large county in the state. Trump won Florida by a comfortable margin.

The group said at least seven states have initiated or are trying to start partisan reviews of last year's election.

Lewis said the push for "audits" long after the 2020 election in places like Texas chips away at the public's sense that results certified by election supervisors are ever final. "It undermines trust in the administration of our elections," she said.