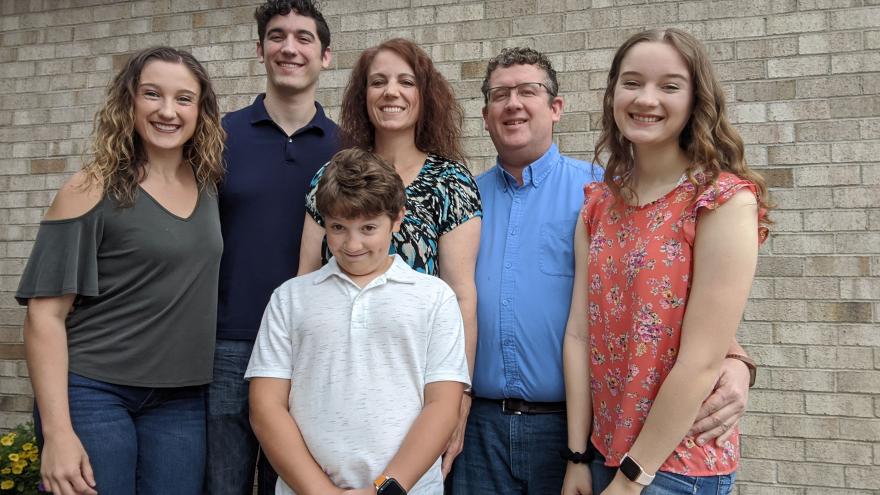 (CNN) -- Following in her siblings' footsteps, Amelia Corne graduates from a Michigan high school this month as the valedictorian. She'll be the third member of her family to hold the title in the past seven years.

Amelia's sister, Bethany, started the tradition as the first in the family to hold the title in 2014. Her brother Lane followed in 2016. Now four years later, it's Amelia's turn to be crowned valedictorian and craft her speech for graduation.

"I'm a perfectionist, so earning all A's was something I had to do," Amelia told CNN on Sunday. "Being valedictorian was just a by-product of that."

They all attended Airport High School in Carleton, a town southwest of Detroit.

"There was a little bit of expectations from my siblings, but not too much since we weren't in high school together," Amelia said.

Being so close in age, Bethany, now 24, and Lane, now 22, told CNN that their competitive side and sibling rivalry pushed them to have the best grades in their class.

They also have a fourth sibling, 7-year-old Sam.

Even though the two older Cornes received the title, Amelia forged her own path through school, her brother, Lane, said.

During her high school career, Amelia sang in choir while her siblings played multiple sports. This journey away from the athletic field led Amelia to Chelsea Whiteoak, her choir teacher and one of her biggest role models.

"She always taught us in choir that if we work hard, then we can do great things," Amelia said. "She was always there for me throughout high school and inspired me to take responsibility for my actions, work hard and to just be nice to everyone."

The senior also participated in other extracurricular clubs, including youth government, national honor society and choir council. She also completed 11 advanced placement courses during her high school career and will graduate with 30 college credits.

"All three of them are excellent students, obviously, but they are also extremely well rounded, which is even better," Airport High School principal Christopher Lukosavich told CNN. He added that they were all willing to go the extra mile for staff and other students.

"One of the main reasons the Corne students were able to accomplish this amazing feat is because they wanted to accomplish it," he said.

"Their parents, who are amazing people and very involved in their kids' lives in a good way, never reached out to me or our counseling department to say, 'What does my kid need to do to be valedictorian?' They let their kids work towards their goals, supported them when they needed it, and let them be high school kids."

All three siblings echoed the principal, saying that this was just a goal they set for themselves. They also praised their parents, Chris and Danielle, from whom they said they learned their work ethic.

Chris Corne said his advice to other parents is to let the kids focus on being students.

"I made sure they didn't have obstacles or influences that would derail them from reaching their goals," Chris said.

Graduating during a pandemic

Amelia said she looked to her siblings for advice on writing her graduation speech. She said that a song titled "Always Keep this Close" that her choir was supposed to sing at the graduation ceremony inspired her speech that's now on hold.

"It tells a story how every experience in your life shapes you and if you can hold on to those precious moments you had ... then you'll have everything you need to go on and succeed," she said.

Like other high schools around the nation, her graduation ceremony is in limbo at the moment due to the pandemic. Lukosavich told CNN they are hoping to still have an in-person ceremony for the 215 graduates later in the summer.

Amelia isn't the only one in the family with a graduation this year. Lane graduated this month from the University of Kentucky with a bachelor's in materials engineering.

He'll soon start a job with General Motors. Chris and Bethany also work in the automotive industry. Chris is a Ford maintenance supervisor, and Bethany, a 2018 graduate from the University of Alabama, works at Buick & GMC Communications.

Amelia plans to attend Saginaw Valley State University in the fall. She wants to be a high school math teacher.