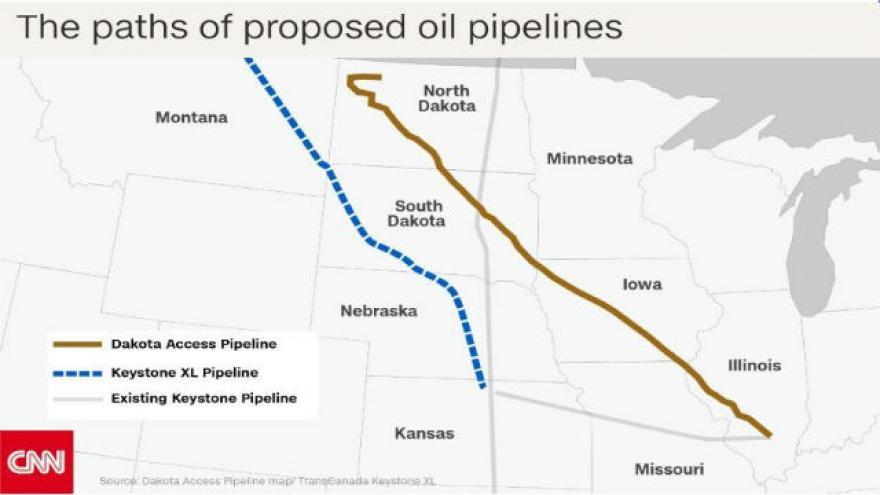 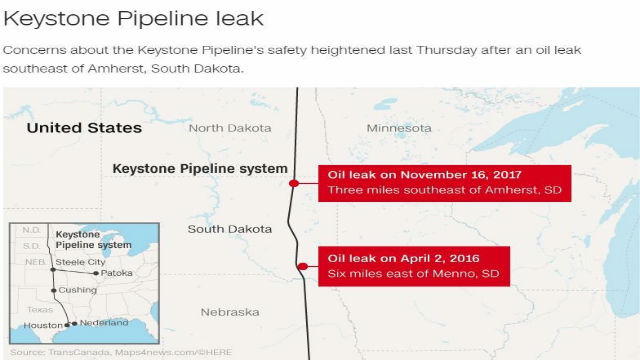 (CNN) -- Nebraska officials voted Monday to allow the Keystone XL pipeline to cross the state, a key step toward the completion of the Keystone Pipeline network.

The state's Public Service Commission voted 3-2 in favor of the expansion pipeline, days after the existing Keystone Pipeline spilled 210,000 gallons of oil in South Dakota.

The Keystone Pipeline system transfers crude oil via a 2,600-mile route from Alberta, Canada, east into Manitoba, and then south across the US border to Texas, according to parent company TransCanada.

The proposed Keystone XL Pipeline, which would stretch from Hardisty, Alberta, southeast to Steele City, Nebraska, would augment other pipelines and complete the entire system.

"[T]his pipeline will mean greater energy security for all North Americans by making sure people have access to Alberta's responsibly developed energy resources," she said in a statement.

But Nebraska officials did not approve TransCanada's preferred route, opting instead to approve an alternate route. And some pipeline critics say that's a "major setback" for TransCanada.

"Today was a victory for everyone working to stop Keystone XL," tweeted Jane Fleming Kleeb, chair of the Nebraska Democratic Party. "TransCanada did not get their preferred route which means years of new review and legal challenges are now on the table."

Nebraskans expressed concerns about the first route affecting the Sandhills, an area known for dramatic scenery, biodiversity and grass-covered dunes. That route was modified but eventually rejected by the state.

The second option, the so-called Preferred Route, was slated east the Sandhills. But state officials deemed that to be a "particularly fragile ecological area," according to the Nebraska Public Service Commission.

The third option -- and the one that was approved Monday -- is the Keystone Mainline Alternative Route. State officials said it would have the least environmental impact, affecting fewer areas of threatened and endangered species. And because this route runs alongside the existing Keystone Pipeline for about 100 miles, it would also make resources easier to monitor, state officials said.

But Crystal Rhoades, one of the commissioners who voted against the pipeline Monday, said the approved route would still cut through several miles of fragile soils that have a high probability of landslides.

The Keystone XL debate has raged for years. The Canadian government had urged President Barack Obama to approve the project, touting its job-creating potential. But in February 2015, Obama vetoed legislation that would have approved the project.

Fast-forward to this March, when President Donald Trump's administration fulfilled a campaign promise and issued a permit approving the Keystone XL's construction.

Many supporters of the pipeline expansion say it'd be an economic boon. In 2015, the State Department said the project would create about 42,000 jobs directly and indirectly, including about 3,900 construction jobs.

It would also provide about $2 billion in economic benefits, the State Department review said.

But the construction jobs would last no more than two years. And once they wrapped up, Keystone XL would leave only about 50 permanent jobs.

Environmental groups lobbied against the Keystone XL, expressing concerns that the pipeline will rely on Canadian oil sands -- a dirtier form of oil that releases more greenhouse gases than standard oil extraction.

In addition, environmentalist groups are wary that construction of the pipeline -- and potential leaks -- would impact sources of fresh water like the massive Ogallala Aquifer, which lies beneath the Great Plains. And Native American groups have argued that the pipeline would cut across their sovereign lands.

TransCanada said a total of 210,000 gallons of oil leaked from part of the existing Keystone Pipeline in eastern South Dakota.

It was the largest Keystone oil spill to date in South Dakota, said Brian Walsh, spokesman for the state's Department of Environment and Natural Resources.

But TransCanada said the incident did not endanger anyone nearby.

"On-site specialists in Marshall County, South Dakota confirm the incident is under control and that there is no significant environmental impact observed or threat to public safety," TransCanada said in a statement Saturday.

On Sunday, TransCanada said 150 people were "working around-the-clock" on cleanup at the site of the leak.