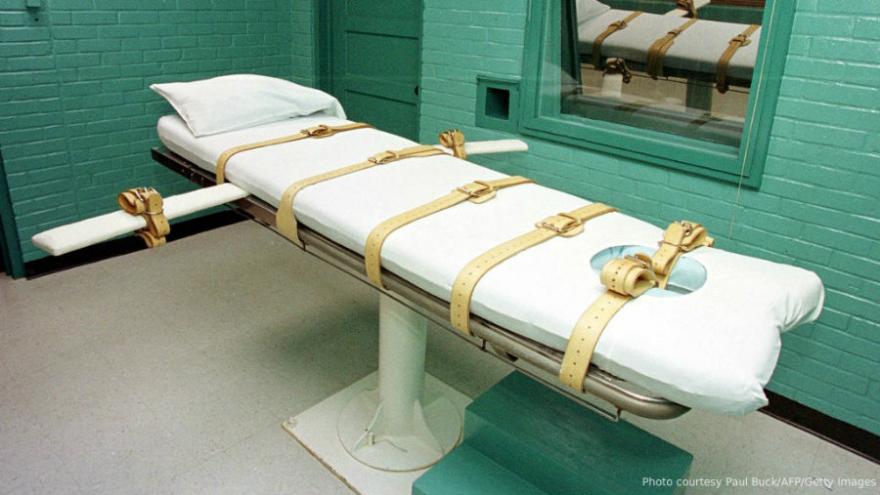 "I am required to carry out the order of the court," Frakes said in a statement. "This agency has done so with professionalism, respect for the process and with dignity for all involved."

Witnessing the execution were three people and a member of the clergy selected by Moore, four journalists and two members of the correctional staff, the statement said. One of the victims' family members was also present, but the statement did not specify which victim.

Grant Schulte of The Associated Press told reporters that, shackled before his execution, Moore's final words were: "Just the statement that I hand-delivered to you already about my brother (Donald) and the innocent men on death row. That's all I have to say."

Moore seemed to repeatedly mouth the words, "I love you," toward the witnesses just after the injections began, Schulte said.

Moore's execution is Nebraska's first in 21 years. Moore was sentenced to death for the 1979 killings of Omaha taxi drivers Maynard Helgeland and Reuel Van Ness Jr.

The last time Nebraska executed an inmate was in December 1997, when Robert Williams was put to death using the electric chair.

Legal efforts by German drug company Fresenius Kabi to force Nebraska to return two of the drugs it planned to use in the execution were denied. Fresenius Kabi raised questions about how the state obtained them and wrote in its lawsuit that the use of its drugs in capital punishment would cause "harm to its property interests."

The two Fresenius Kabi drugs that the state used are cisatracurium, a muscle relaxer, and potassium chloride, which stops the heart. The four-drug cocktail also includes the sedative diazepam, also known as Valium, and the powerful painkiller fentanyl, which has helped fuel the ongoing opioid epidemic in the US.

Amnesty International, one of many groups decrying the execution, said it was the first lethal injection in the United States to include fentanyl. Nevada was slated to be the first to use a drug combination that included fentanyl, but a judge put it on hold last month.

The American Civil Liberties Union said the execution was "shrouded in secrecy."

"This execution of Carey Dean Moore does not comport with Nebraska's proud tradition of open government," the ACLU statement said. "Today stands as the most recent dark chapter in Nebraska's troubled history with the death penalty."

Gov. Pete Ricketts is a staunch supporter of the death penalty. He told The New York Times earlier this month that he views his stance on the death penalty as compatible with his Catholic faith.

His comment came after the Catholic Catechism was revised at Pope Francis' direction and now calls the death penalty "inadmissible." The Catholic Catechism, the church's book of moral and religious teachings, had previously allowed the use of capital punishment in certain cases.

"While I respect the pope's perspective, capital punishment remains the will of the people and the law of the state of Nebraska," according to Ricketts' statement to the Times. "It is an important tool to protect our corrections officers and public safety. The state continues to carry out the sentences ordered by the court."

After Nebraska legislators overrode Ricketts' veto to outlaw the death penalty in 2015, he responded by personally investing money in a referendum to restore the death penalty, which passed the following year.

He has said that capital punishment can be justified.

"The Catholic Church does not preclude the use of the death penalty under certain circumstances: That guilt is determined and the crime is heinous. Also, protecting society," he said in a 2015 interview. "As I've thought about this and meditated on it and prayed on it and researched it, I've determined it's an important tool."