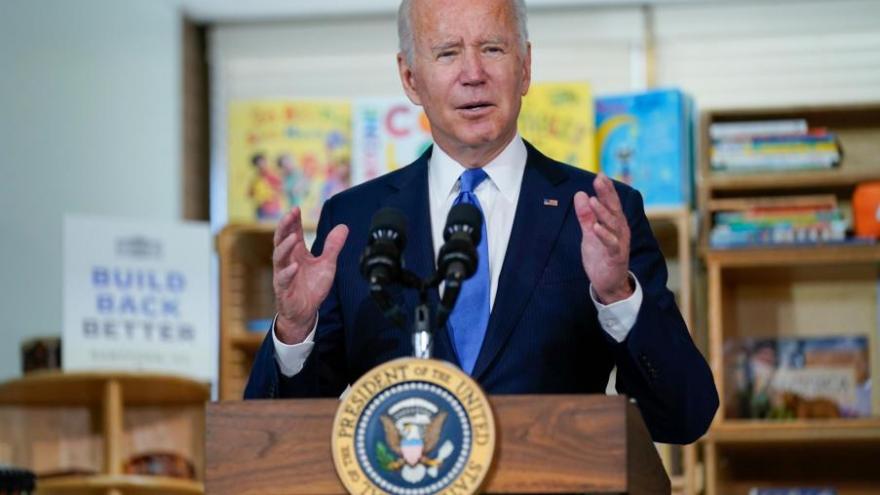 Democrats are within striking distance of securing agreement on two critical components of President Joe Biden's domestic agenda, according to a source familiar with the negotiations, as they work through final language on the universal preschool and child care components of the package.

(CNN) -- Democrats are within striking distance of securing agreement on two critical components of President Joe Biden's domestic agenda, according to a source familiar with the negotiations, as they work through final language on the universal preschool and child care components of the package.

For Biden, the looming agreement ensures that a central plank of his initial sweeping economic and climate proposal will make it into the final package, which over weeks of negotiations has been scaled down from $3.5 trillion to between $1.5 trillion and $2 trillion.

The two proposals, which Democrats have said will combine to reach millions of children with free preschool and subsidized child care, make up some of the largest elements of a final package in terms of funding -- though the overall number, expected to be in the hundreds of billions of dollars, hasn't been finalized yet.

While there has been broad top-line Democratic support for both proposals, the move toward closing a final agreement on each is a key signal as Biden and Democratic leaders press for an agreement on the second piece of his sweeping infrastructure and economic plans.

In theory, the pre-K and day care programs are designed to work in concert to significantly boost child care options for working parents -- an issue lawmakers have been grappling with for years that has become particularly acute during the Covid-19 pandemic.

Biden has been explicit in public and private comments that the two elements would stay in the package, even as other key components have been the subject of fierce debate or scaled-back ambitions, or have even been dropped entirely as Democrats work to lock up the votes to secure a path forward.

"We cannot be competitive in the 21st century in this global economy if we fail to invest," Biden said last week as he laid out key elements of his child care proposals at the Capitol Child Development Center in Hartford, Connecticut.

He's spoken in personal terms about his experience with finding care for his two sons after the death of his first wife and daughter in a car accident shortly before he was to be sworn in for his first term in the Senate.

RELATED: What Biden's sweeping social safety plan might include -- and what it likely won't

The universal pre-K proposal would set up a federal-state partnership, offering states funds to expand public preschool programs to reach an estimated 6 million 3- and 4-year-olds not currently enrolled in preschool or where their parents are paying tuition, the source said.

States that utilize the funding will maintain flexibility in establishing standards for their programs as long as they align with research-based preschool practices, the source said. Biden has consistently pledged that the goal wasn't just free preschool, but high quality preschool as well.

For the first three years of the funding, states will not have to match any portion of the federal funds as they ramp up their programs. The state-level match will gradually scale up to 40%, the source said.

Biden and White House officials have made a key pitch of their proposal the potential combination of better education outcomes and enabling parents with young children to stay attached to the workforce. The latter issue has become particularly critical in the wake of a global pandemic that has hit women particularly hard, officials have said.

"We want to get the economy moving, but millions of women can't go to work because they don't have any child care," Biden said last week at a CNN town hall in Baltimore.

Negotiators are also zeroing in on a final agreement to allow states to offer subsidized child care for low- and middle-income families that would reach an estimated 20 million kids, the source said.

Critically, most families would not have to pay more than 7% of their incomes for child care, and White House officials and Democratic lawmakers have estimated the proposal could cut child care costs by more than half.