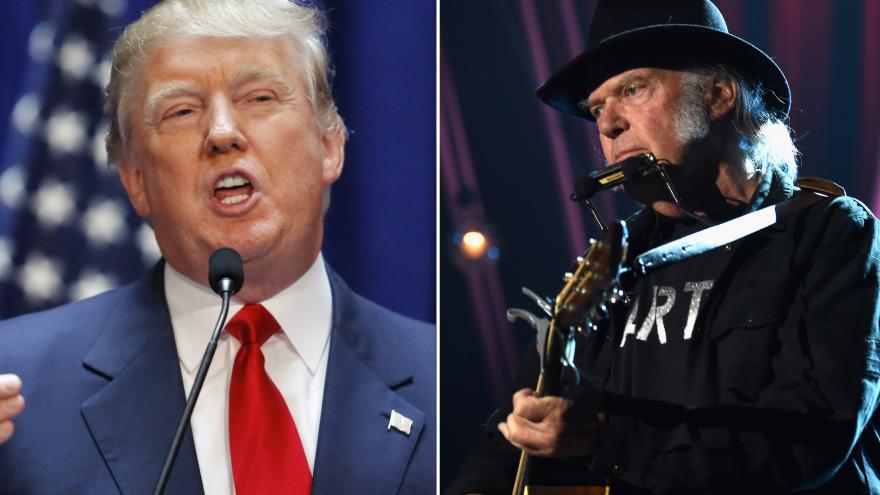 "This is NOT ok with me," Young wrote on Twitter Friday, responding to a video of "Rockin' In The Free World" heard blaring at Trump's event.

In another video of the event with "Like a Hurricane" playing, Young wrote, "I stand in solidarity with the Lakota Sioux" and reiterated, "this is NOT ok with me."

Young previously objected to Trump's use of "Rockin' In The Free World" in 2015 when the song was played during Trump's presidential announcement.

"Donald Trump was not authorized to use 'Rockin' In The Free World' in his presidential candidacy announcement," Young's management company said then, noting that the singer was a supporter of Vermont Sen. Bernie Sanders' 2016 campaign.

Trump's campaign manager at the time, Corey Lewandowski, told Rolling Stone that the campaign had licensed the song, but would respect Young's wish and not use it again, adding that "Trump is a big fan and likes Neil very much."

In February, Young, who became a US citizen this year, penned an open letter to Trump calling him "a disgrace to my country" and that "'Rockin' In The Free World' is not a song you can trot out at one of your rallies."

The Canadian native said he began his path to US citizenship because he wanted to vote against Trump in the 2020 election.

Young is among a number of other iconic rockers who have an issue with Trump's use of their music.

The Rolling Stones last week threatened legal action against Trump's campaign for playing their songs at his campaign rallies, which was first reported by Deadline.

Tom Petty's family also issued a cease-and-desist notice to the Trump campaign after "I Won't Back Down" was played at the President's rally in Tulsa, Oklahoma, last month.

Instead of striking a unifying tone, Trump on Friday in South Dakota railed against what he called a "merciless campaign" by his political foes to erase history by removing monuments some say are symbols of racial oppression.

The President's backdrop of Mount Rushmore, which features the faces of four American presidents, is carved into the Black Hills of South Dakota, a sacred place of spiritual and cultural significance to the native peoples of the area.

The 1868 Fort Laramie Treaty established the Black Hills as part of the Great Sioux Reservation, according to the National Archives, but the lands were systematically taken by the US government after gold was discovered in the area in the 1870s.

On Friday, protesters, many holding signs demanding the land be returned to native people, blocked the entrance to Mount Rushmore prior to Trump's event.