Nestle is making a pink KitKat from ruby chocolate 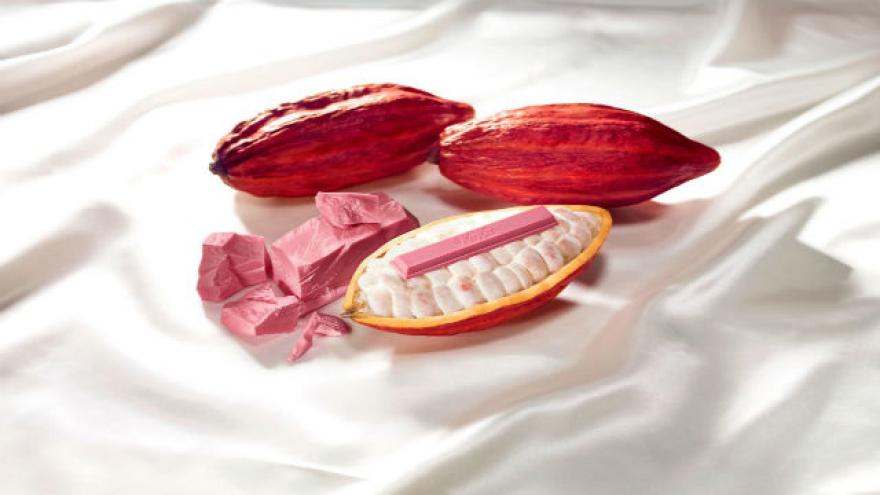 KitKat fans are about to get their first taste of ruby chocolate. Photo courtesy Barry Callebaut

(CNN Money) -- KitKat fans are about to get their first taste of ruby chocolate.

Nestle is launching the new flavor -- KitKat Chocolatory Sublime Ruby -- in stores in Japan and South Korea on Friday, and online in nine other territories including the U.S., U.K., Germany, France and Switzerland.

Ruby chocolate was unveiled in September by Swiss chocolatier Barry Callebaut and is made using special "Ruby" cocoa beans.

Nestle said it offers "a new taste experience, a kind of berry flavor made from the all-natural Ruby cocoa bean with a characteristic pink hue."

Sublime Ruby is the work of top Japanese pastry chef Yasumasa Takagi, who has developed dozens of varieties of KitKats in the past.

Japan is a natural choice to launch the groundbreaking new chocolate, given the craze for flavored KitKats ever since a Green Tea variety was introduced there in 2004.

The country now has over 300 different KitKat flavors, including wasabi, cherry blossom and even KitKat sushi.

Quirky flavors aren't the only reason KitKat is huge in Japan -- its name sounds similar to the Japanese phrase "kito kato," which translates to "surely win."

The chocolate wafers have become a common gift for students about to take tough exams, or on other special occasions.

KitKat is Japan's top chocolate brand, and its sales have grown by 50% since 2010. Nestle opened a new factory in the country in July dedicated to flavored KitKats.

The new ruby chocolate bars will be sold at KitKat Chocolatory boutique stores in Japan and South Korea. The company is also planning to sell them at around 80 pop-up stores across Japan as Valentine's Day approaches.