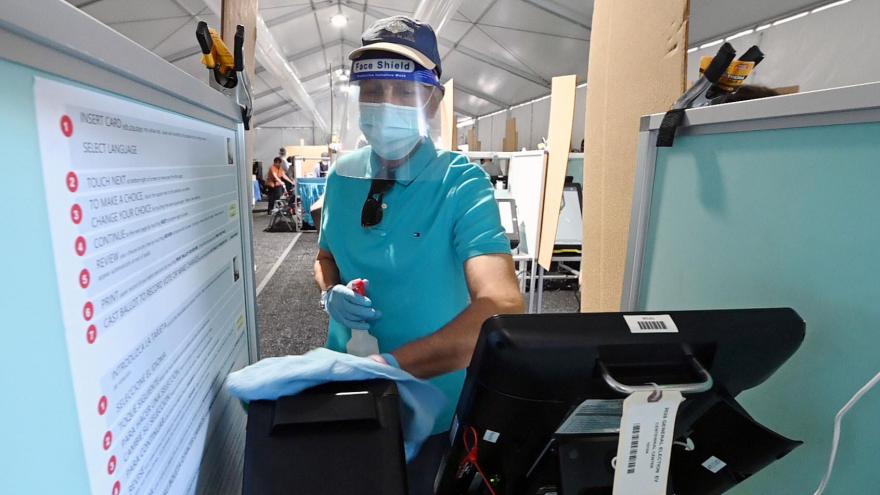 Carl Chamberlain sanitizes a voting booth between voters inside a tent at a shopping center on the first day of in-person early voting on Oct. 17 in Las Vegas, NV.

(CNN) -- A Nevada district judge on Friday denied a request brought by a conservative activist to halt the certification next week of the state's election results that show President-elect Joe Biden leading in Nevada by more than 33,000 votes.

The case was filed by conservative activist Sharron Angle and her organization, the Election Integrity Project, against Nevada's Secretary of State Barbara Cegavske -- the only Republican statewide office holder.

On Friday, District Court Judge Gloria Sturman denied Angle's challenge to the outcome and her request for a preliminary injunction to the Nevada Supreme Court's certification of the election results on Tuesday.

CNN projected Biden will win Nevada's six electoral votes. Trump has not conceded the race, and his campaign and Republican allies have filed multiple lawsuits in several states in a long-shot bid to try and delay the finalization of results.

Sturman also denied a motion to strike down the Nevada law that cleared the way for the influx of mail-in votes that came in the election.

"The civil remedy of throwing out an election is just a shocking ask," she told attorney Joel Hansen. "You are asking me to throw out 1.4 million votes on the chance that somewhere between 250 and 8,000 people should not have voted."

Sturman, who won reelection this cycle, noted that if the election was thrown out there would be no one holding office, including herself.

The lawsuit contends that the election was held under an unconstitutional law that cleared the way for a by-mail election. The Election Integrity Project also claimed it found 1,411 voters who moved to California and registered to vote in California, and another 8,000 voters who hadn't voted in a decade and received a ballot, contrary to law. The EIP says they sent out volunteers who discovered the ballots went to people who no longer lived there.

Hours earlier, Sturman had denied a request by a failed Republican congressional candidate for a re-vote in Nevada's largest county, which certified its results on Monday.

Losing GOP candidate Jim Marchant had requested a new election in just one of the seven counties covered by the congressional district -- the Democratic-rich Clark County. Sturman denied the request. She also said that it would have been difficult for Marchant to make up the 30,000 votes between him and Democratic Rep. Steven Horsford.

On Monday morning, Sturman will take up the case of another Republican candidate who lost their race.

Elections officials in the Democratic stronghold of Dane County, Wisconsin, rejected requests from the Trump campaign to throw out tens of thousands of absentee ballots on Friday as the state kicked off its partial presidential recount.

Wisconsin's two largest counties, Milwaukee and Dane, are conducting a recount after the Trump campaign petitioned for one. Both counties say they will be counting votes until December 1, which is the deadline for the state to certify its results.

In Dane, home to the state capital of Madison, Trump campaign lawyers first asked the three-member board of canvassers not to count any absentee ballot that wasn't associated with a written application for a ballot, including all of the more than 60,000 ballots cast during in-person early voting.

A Trump lawyer also asked for the rejection of all ballots for which clerks had added in a witness' address information on the ballot envelope. The state elections commission told municipal clerks in 2016 that they should add in that information if it was missing and they could reasonably discern it.

The board unanimously rejected the Trump campaign's request.

The Trump campaign is trying to overcome Biden's more than 20,000-vote margin of victory in the state. Past recounts in the state haven't led to swings in that level of votes, with the 2016 recount in the presidential race increasing Trump's margin by just 131 votes.