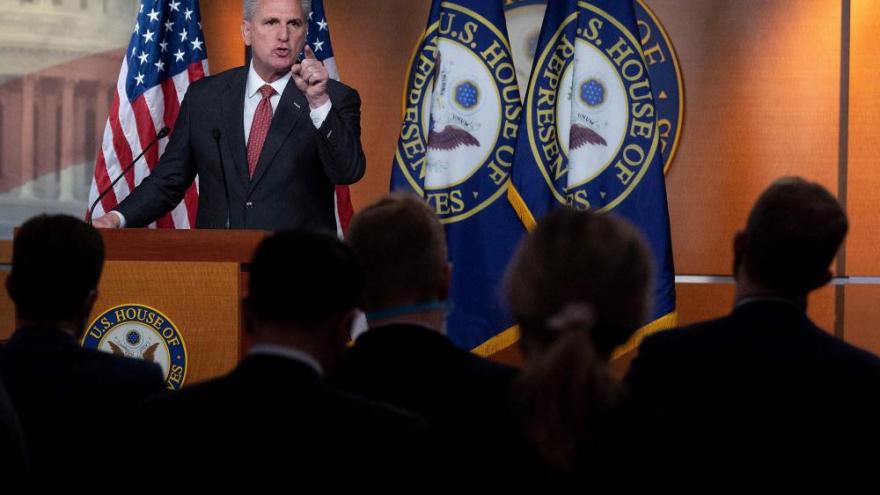 (CNN) -- In the days following the January 6 insurrection, House Minority Leader Kevin McCarthy told Republican lawmakers on a private conference call that then-President Donald Trump had admitted bearing some responsibility for the deadly attack, according to new audio -- a significant admission that sheds light on Trump's mindset in the immediate aftermath of the US Capitol riots.

A readout of that conversation, which took place on January 11, 2021, had been previously reported by CNN. But two New York Times reporters obtained an audio recording of the conference call for their upcoming book, "This Will Not Pass: Trump, Biden and the Battle for America's Future," and shared it with CNN.

On a separate call the day before, McCarthy said, "I had it with this guy. What he did is unacceptable. Nobody can defend that, and nobody should defend it." The book's authors say those comments were in reference to Trump.

McCarthy has declined to cooperate with the House January 6 committee, which wants to question him about his communications with Trump, White House staff and others in the week after the insurrection. McCarthy has said he has nothing relevant to offer the panel since he's already publicly revealed he had a phone call with Trump on January 6.

McCarthy made similar public comments in a little-noticed local radio interview one week after the insurrection, which CNN reported on earlier this year.

"I say he has responsibility," McCarthy said on KERN, a local radio station in Bakersfield, California, on January 12 of last year. "He told me personally that he does have some responsibility. I think a lot of people do."

Earlier this year, McCarthy evaded a question during a news conference about whether he remembers telling House Republicans that Trump took responsibility for the Capitol riot.

To date, Trump has never publicly accepted any responsibility for the attack. Trump's state of mind -- and whether he has privately admitted any culpability for the insurrection -- has been of keen interest to the House select committee investigating the January 6 Capitol attack.

The Times reporters also revealed another bombshell audio this week, in which McCarthy is heard telling other House Republican leaders in the days after January 6 that he planned to advise Trump that he should resign. McCarthy and his aides had vehemently denied that reporting before the audio was leaked.

The select committee also wants to know why McCarthy has since changed his tune on Trump, and whether Trump or any of his associates asked McCarthy to change his tone about the President's role in the attack and their private conversations.