Despite advances, it will be 'months' before everyone who wants a vaccine can get one, task force says 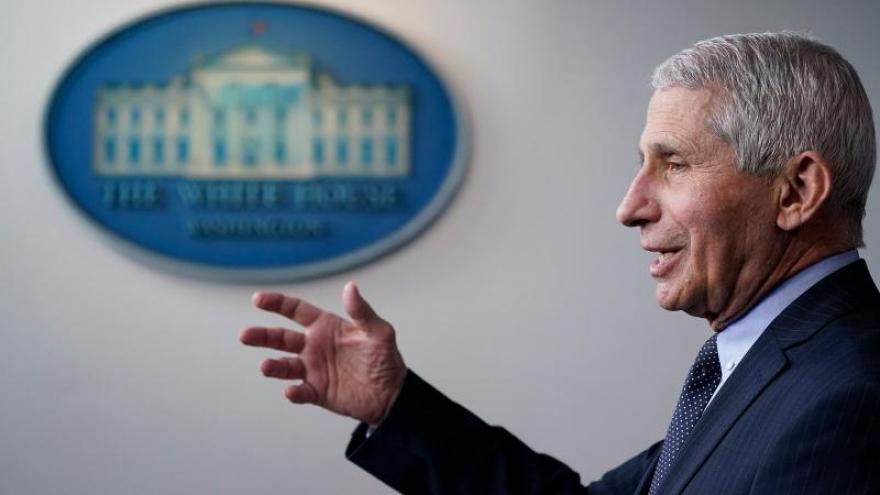 Dr. Anthony Fauci, director of the National Institute of Allergy and Infectious Diseases, speaks with reporters in the James Brady Press Briefing Room at the White House, Thursday, Jan. 21, 2021, in Washington.

Andy Slavitt, senior adviser to the White House Covid-19 response team, said it will be "months before everyone who wants a vaccine will be able to get one."

The administration currently faces two constraining factors on vaccine distribution: quick-enough supply and the ability to administer vaccines once they are produced and at distribution sites, he said.

President Joe Biden announced Tuesday that most American adults will have access to a vaccine by the end of the summer. The White House is currently on pace to meet its vaccination goal of 100 million vaccines in Biden's first 100 days, Slavitt said, but added that "any (vaccine) stockpile that may have existed no longer exists."

The Biden administration is working to ramp up its vaccine distribution and on Tuesday said that it would be increasing its weekly allocation by 16%.

Facing some criticism from Maryland Gov. Larry Hogan, a Republican, over the number of doses being made available, Slavitt blamed to the previous administration.

"We hear you, Gov. Hogan, and we couldn't agree more," Slavitt said.

"I would love to tell you that we inherited a situation where there were stockpiles and stockpiles of vaccines sitting there. That is not the case. And it is our job to level, both with the governors, and with the public," he said.

Slavitt said the administration is maintaining "a rolling inventory of two to three days of supply that we can use to supplement any shortfalls in production and to ensure that we are making deliveries as committed."

In its final days, Trump administration officials conceded that despite initial indications that second vaccine doses were being held in reserve, there was, in fact, no stockpile.

However, Biden officials said during the call that some states are holding back doses to give people their second shot.

"I also know that there are concerns about various viruses mutate, and we have always expected that variants would emerge, and we have been looking for them," Walensky said.

"The variants that have been identified recently seem to spread more easily. They're more transmissible, which can lead to increased number of cases, and increased stress on our already overtaxed system," Walensky added.

The briefing got off to an unfortunate start on Wednesday with multiple technical difficulties. The administration has repeatedly touted their transparency amid the enormous undertaking of getting the pandemic under control, but the briefing, which was conducted virtually via Zoom, had multiple audiovisual issues.

As Zients began the call, his audio was intermittently audible.

Walensky also had issues with her line on mute.

Dr. Anthony Fauci spoke for nearly a full minute while on mute, at which point the audio came on and he was informed of the issue, which intermittently continued with other officials through the briefing's conclusion.

The briefing did include an updated US coronavirus death forecast from Walensky, who said the CDC's ensemble forecast now projects there will be 479,000 to 514,000 deaths by February 20.

Unlike some individual models, the CDC's ensemble forecast only offers projections a few weeks into the future. The previous ensemble forecast, published January 20, projected up to 508,000 coronavirus deaths by February 13.

At least 425,406 people have already died from Covid-19 in the United States, according to data compiled by Johns Hopkins University.

And a portion of the briefing was devoted to emphasizing that equitable distribution of medical care and vaccines is key to the administration's national coronavirus plan, a priority amid recent research that has showed communities of color are not being vaccinated in proportion to their share of the population .

"Equity is absolutely a foundational component of our national plan," Dr. Marcella Nunez-Smith, chair of the Covid-19 health equity task force, said in the virtual briefing.

She said in addition to the "moral imperative" to ensure that those hardest hit by the pandemic are able to stay safe, the US "cannot beat this virus without making sure we're executing a plan that works for all communities."

This story has been updated to include additional reporting from the briefing.