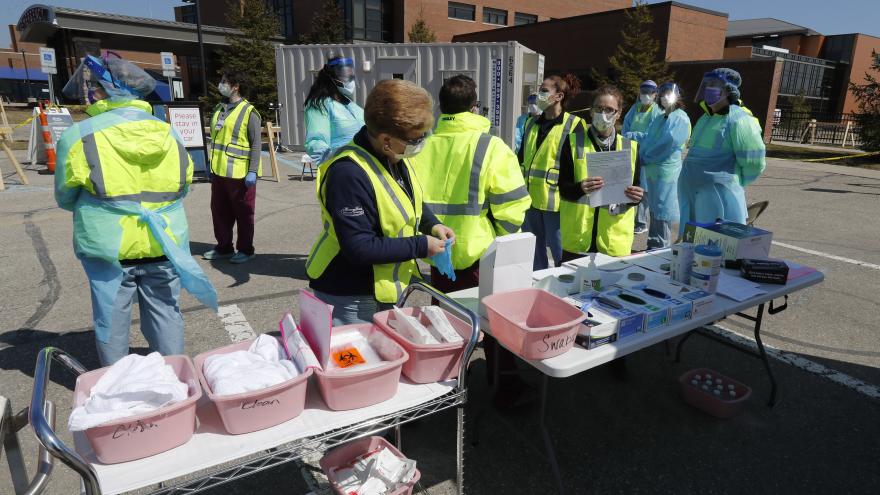 (CNN) -- New coronavirus hot spots are emerging in the Chicago, Detroit and New Orleans areas -- and health officials there are pleading for medical resources to meet the surges.

Michigan's roughly 3,000 cases are nearly a tenfold increase from March 19, and officials there say the federal government needs to prioritize states like theirs that face case surges, rather than having governors compete for supplies.

"I've heard of (them) putting their mask in a paper bag ... and taking it out when they think they have a patent who has coronavirus," Khaldun said.

These pleas come as the US just became the nation with the greatest number of confirmed coronavirus cases, overtaking China and Italy. The US has at least 90,700 cases and 1,347 deaths, and several health officials and experts say it's still the beginning.

Outbreaks in New York, which has just under half the country's cases, and California, Washington and New Jersey have captured the nation's attention for weeks. Health officials there have long been clamoring for more equipment.

But officials warn the newercenters of case growth will soon look like the earlier ones.

"Hot spots like Detroit, like Chicago, like New Orleans ... will have a worse week next week than what they had this week," US Surgeon General Dr. Jerome Adams told "CBS This Morning" on Friday.

A prominent Detroit-area hospital system, meanwhile, has acknowledged a letter circulated online detailing how life-and-death decisions may have to be made in a public health emergency.

"The letter is part of a larger policy document developed for an absolute worst-case scenario. It is not an active policy," a Henry Ford Health System spokesman told CNN Friday. The system also said no Henry Ford hospital is at capacity with coronavirus patients.

The letter, addressed to patients and their families in the event it is sent, says patients with the best chance of improving would be the first priority. It also says patients treated with a ventilator or ICU care may have those treatments stopped if they do not improve over time.

"Henry Ford is one of America's great health care systems, and what they put out is honest," Detroit Mayor Mike Duggan told CNN's Jim Sciutto on Friday. "... Everybody is doing everything we can to stop it, but you would be irresponsible as a health system CEO if you weren't planning for that eventuality."

Developments around the country

• Chicago's Rush University Medical Center is converting a large part of its lobby into a potential ward with beds to help handle an expected surge.

• Chicago "could be expecting upwards of 40,000 hospitalizations in the coming weeks, not 40,000 cases," Mayor Lori Lightfoot said Thursday.

• The USNS Mercy, a 1,000-bed Navy hospital ship, arrived Friday at the Port of Los Angeles. It is taking non-coronavirus cases from area hospitals. Another Navy hospital ship, the USNS Comfort, is expected to reach the New York area next week for the same purpose.

• The US House of Representatives on Friday approved a historic $2 trillion stimulus package to help offset the pandemic's economic effects, including sending checks directly to individuals and families.

In New York, hospitals are overwhelmed, with many already low on staff and running out of some equipment, like doctors' and nurses' protective wear.

Gov. Andrew Cuomo days ago said his state needed another 30,000 ventilators on top of the 7,000 it had. New York has been "shopping literally around the globe" for them, he said Friday.

President Donald Trump on Friday tweeted that thousands of federally delivered ventilators had been found in "New York storage," and that the state "must distribute them now."

Cuomo told CNN Friday that this was "incorrect and grossly uninformed."

The state does have ventilators in a stockpile, and they all haven't been delivered because "the hospitals aren't at their apex" yet.

Cuomo: New York may be 21 days away from a peak in cases

The rate of new coronavirus cases is slowing in New York, but it still may take 21 days for the Empire State to hit the apex, Cuomo told reporters Friday in New York City.

The number of new cases is now doubling roughly every four days, down from what had been every two days, Cuomo said.

The state and its National Guard already are assembling four 1,000-bed temporary, overflow hospitals in existing buildings, including at Manhattan's Javits Convention Center.

Several health officials and experts say the fight against coronavirus is still beginning.

"We are in for a bumpy ride for the next 12 to 18 months," Dr. Ashish Jha, the director of the Harvard Global Health Institute, said Thursday. "If we are aggressive now about stopping things, shutting down, building up a test regime, we can then open up again .... and most places can go back to work."

"But only when we are ready. And we are nowhere near ready now," he said.

When President Donald Trump said he hopes to have Americans back at work by Easter, he was making an "aspirational projection," said Dr. Anthony Fauci, director of the National Institute of Allergy and Infectious Diseases.

Baker, the Massachusetts governor, said the aspiration was unrealistic.

"We're not going to be up and running by Easter, no," Baker said Friday.

Across the country, at least 22 states have issued stay-at-home orders, with some not going into effect until the end of the week.

Some governors have complained that states are competing against each other for health professionals' personal protective equipment and devices like ventilators.

And some experts have called for Trump to use the Defense Production Act, partly to compel coordination of companies' supplies to states and ensure fair prices.

Hospitals and states trying to distribute among themselves is ridiculous, when the national government could coordinate, CNN national security analyst Juliette Kayyem said Friday.

Talking about when to get people back to their workplaces is "distracting us from what we need to do" with social distancing and addressing hospitals' shortages, she said.

The areas officials are worried about

Health officials say California, with more than 3,000 cases, isn't far behind from seeing a surge in cases similar to New York's. And with positive tests rapidly increasing across the country, experts worry other states may follow.

Earlier this week, Louisiana Gov. John Bel Edwards said cases in his state were growing faster than anywhere in the world. Health experts said they were monitoring "clusters" in six nursing homes and in New Orleans.

Jefferson and Orleans parishes, which make up most of metro New Orleans, ranked among the top seven counties nationwide in deaths per 100,000 residents for areas reporting 100 cases or more.

Doctors, nurses on the front lines

Responding to the rising numbers, some hospitals say they've reached a breaking point -- both because of overworked staff and few medical supplies left.

A Long Island hospital nurse said patients were streaming in with "non-stop coughing, sweaty, fevers" and with "fear in their eyes."

"I haven't slept because my mind won't shut off. I cried in the bathroom on my break, as I peeled off the PPE from my sweaty self, mask indentations on my face. I cried the entire ride home," the nurse, whom CNN is not naming, wrote in a social media post.

In one New York City hospital, an assistant nurse manager who suffered from asthma died less than a week after testing positive for the virus.

Kious Jordan Kelly was a "beloved member" of the nursing staff at Mt. Sinai Hospital, the hospital said.

The coronavirus crisis has "turned our frontline professionals into true American heroes," Mt. Sinai said in a statement Tuesday. "Today, we lost another hero -- a compassionate colleague, friend and selfless caregiver."