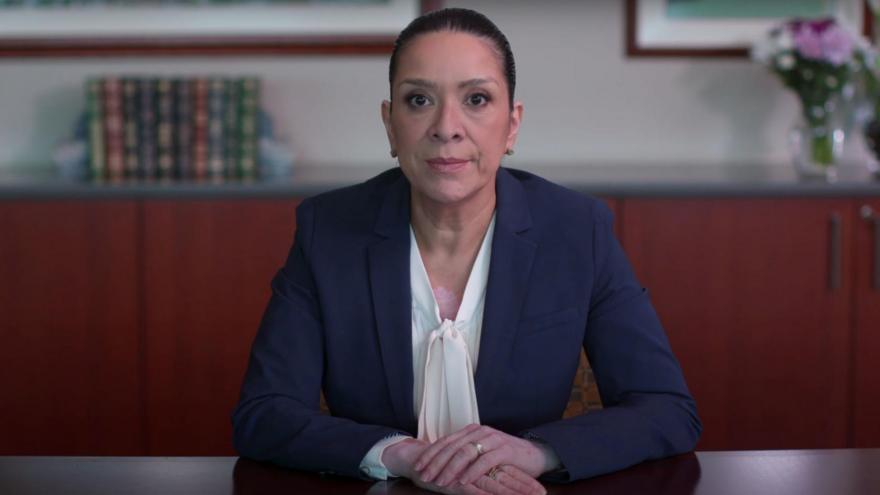 U.S. District Judge Esther Salas, whose son was killed and whose husband was shot at their New Jersey home in July, makes her first public statement since the shooting.

(CNN) -- The federal judge whose son was killed and whose husband was shot at their New Jersey home last month revealed her son's final moments in her first public comments about the shooting.

In a video posted to YouTube, US District Court judge Esther Salas said the shooting came just after her son Daniel Anderl celebrated his 20th birthday at their home with friends from Catholic University, where he was a rising junior.

"As the afternoon progressed, it was time to clean up from the weekend festivities; Daniel and I went downstairs to the basement and we were chatting, as we always do. And Daniel said 'Mom, let's keep talking. I love talking to you, Mom.' It was at that exact moment that the doorbell rang, and Daniel looked at me and said, 'Who is that?'

"And before I could say a word, he sprinted upstairs. Within seconds, I heard the sound of bullets and someone screaming, 'No!'"

Her emotional comments come about two weeks after a man wearing a FedEx uniform opened fire at her home in North Brunswick. The gunman, a hate-filled men's rights attorney who had argued a case before Judge Salas, killed her son and seriously wounded her husband, Mark Anderl, when they opened the door.

The same gunman was also the primary suspect in the killing of a men's rights activist in California a week earlier. He was later found dead of what police believe were self-inflicted gunshot wounds.

"While my husband is still in the hospital recovering from multiple surgeries, we are living every parent's worst nightmare -- making preparations to bury our only child, Daniel," she said.

In addition, Salas said judges should be afforded greater privacy protections from the public.

"My family has experienced a pain that no one should ever have to endure. And I am here asking everyone to help me ensure that no one ever has to experience this kind of pain. We may not be able to stop something like this from happening again, but we can make it hard for those who target us to track us down."

She said the gunman who came to her home too easily obtained her personal information.

"In my case, the monster knew where I lived and what church we attended and had a complete dossier on me and my family. At the moment, there is nothing we can do to stop it, and that is unacceptable," she said. "My son's death cannot be in vain, which is why I am begging those in power to do something to help my brothers and sisters on the bench."

Salas said she did not know the best way to protect judges' privacy and called for a national dialogue to solve the issue.

"Let me be clear and tell you firsthand -- this is a matter of life and death. And we can't just sit back and wait for another tragedy to strike," she said.

The US Marshals Service, tasked with protecting more than 2,700 judges, has reported threats to judges have grown significantly in the past five years. Since 2016, threats and inappropriate comments made to the judiciary have nearly doubled to about 4,500 last year.

The last killing of a federal judge was in 2011, when John Roll was one of six people killed at a public event for US Rep. Gabby Giffords in Arizona.