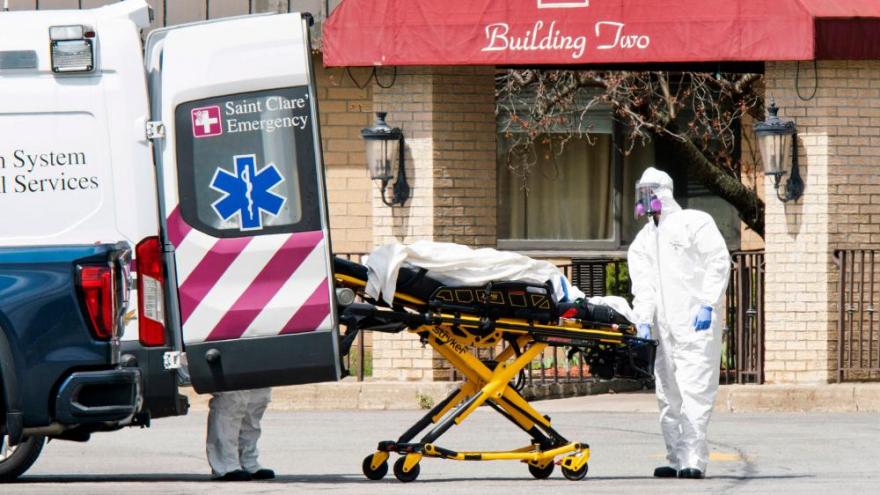 Medical workers load a deceased body into an ambulance while wearing masks and personal protective equipment (PPE) at Andover Subacute and Rehabilitation Center in Andover, New Jersey on April 16, 2020.

(CNN) -- The nephew of a man who died during the height of the coronavirus pandemic in New Jersey is suing the nursing home where his uncle was a resident, alleging that the facility failed to provide the legally required level of care while fraudulently claiming to do so.

Scheinbaum, one of the owners of the facility and a named defendant in the suit, declined to comment on Roberts' specific allegations, but said in a statement that the staff of Andover II had taken the Covid-19 threat seriously.

A one out five-star rating

Roberts' uncle, Albert Roberts, died April 1 due to complications from Covid-19, according to the suit. He was 76 at the time of his death, according to Roberts and his attorney, Alina Habba.

"I spoke to him not even a month before all of this happened," Roberts said of his uncle. "He wanted me to come by and bring him a slice of pizza.

"Prior to him passing, I was just his little nephew," Roberts said. "I would go up and spend time with him, bring him something to eat, bring him a snack."

Albert Roberts was a resident at the Andover II center, which, the suit notes, has received a one-star rating from the federal Centers for Medicare & Medicaid Services (CMS) out of a possible five stars. Andover I, the other facility, is rated at three stars.

"Among the many issues cited, one of the consistent findings was that the Facilities [both Andover I and Andover II] had continuously failed to meet the requisite safety and sanitary standards needed to protect against the spread of infection and communicable disease among its residents and patients," the suit says.

"In fact, CMS specifically directed the Facilities to implement adequate infection prevention and control programs on numerous occasions," the suit continues. "...Despite CMS's instruction, Defendants failed to implement any such measures and the Facilities continued to operate without satisfactory infection prevention and control programs in place."

The suit further alleges that "despite the extensive history of regulatory violations and poor assessment ratings," the facilities were marketed as having "an 'excellent reputation with regulatory agencies.'"

Speaking to CNN, Roberts said that when he visited his uncle at the facility prior to the pandemic, "the people there seemed like they cared, but the staff seemed very overworked."

But after his uncle's death, Roberts said, he was unable to get any information about what had happened, or even where his uncle's body was.

"There was a limbo period, where we didn't even know where he was," Roberts said. "I wasn't able to get confirmation, really on anything."

Roberts recalled the weeks after his uncle died as a "frantic pace, calling around trying to get answers, to just get an idea of what the hell happened."

Roberts claimed in an interview with CNN that the nursing home didn't confirm that they had his uncle's body for 21 days.

Roberts is asking the court to recognize all residents of the facilities as a class for the purposes of the suit. The suit claims 94 people have died from Covid-19 across both facilities.

Reached by CNN, Scheinbaum did not comment on the specifics of the lawsuit or claims by Roberts, but said the facility did take steps to respond to the coronavirus pandemic.

"In the early days of the pandemic, Andover Subacute and Rehabilitation II healthcare professionals took proactive steps to prepare for the crisis, ranging from increasing social distancing and separating sick patients, addressing staffing issues, ensuring adequate medication for ill patients, etc," he said. "We monitored and complied with Centers for Disease Control and Prevention (CDC) guidelines.

"Despite all our efforts, the virus made its way into our facility, as it did in the majority of long-term care facilities across New Jersey," Scheinbaum continued. "We took every possible step to handle this crisis internally while simultaneously making dozens of outreaches to local, state, and federal agencies for help. Our healthcare professionals and staff worked around the clock providing quality care to our residents in the face of extraordinary challenges."

Scheinbaum went on to say that Andover II "has made significant progress over the past several months and the facility has made a strong recovery since the height of the pandemic."

As of June 2, Scheinbaum said, CMS "concluded that Andover Subacute II was in substantial compliance with all applicable standards of care."

"Further, Andover Subacute II has not had a single COVID symptomatic resident since May 12, 2020," he said.