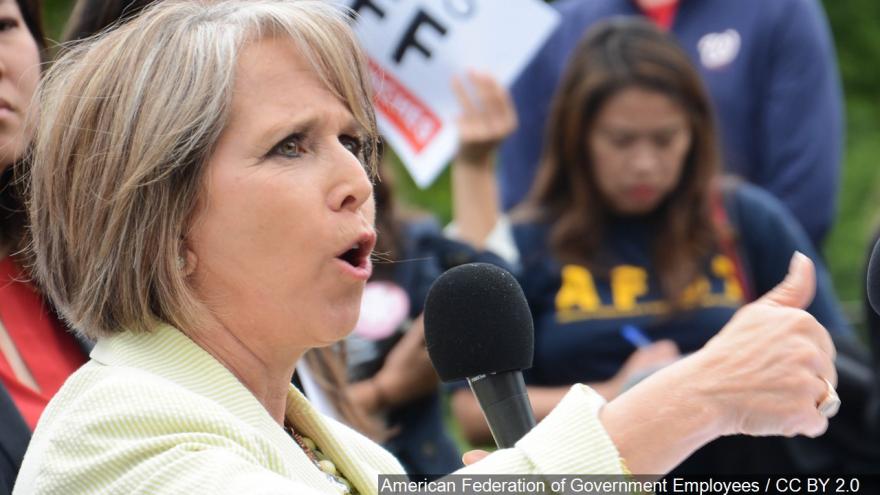 (CNN) -- New Mexico Gov. Michelle Lujan Grisham wants to provide state residents with free tuition to public colleges, a plan that, if passed by the state legislature, would add New Mexico to the growing list of Democratic-led states to offer free higher education.

Lujan Grisham, a Democrat, announced the New Mexico Opportunity Scholarship on Wednesday while speaking at an education summit at Central New Mexico Community College. The plan would provide free undergraduate tuition at New Mexico colleges for in-state residents and aims to cover nearly 55,000 students a year. It would cover tuition and fees for recent high school graduates at four-year public colleges as well as recent high school graduates and returning adult learners at two-year community colleges.

"We're going to deliver a major boost. F-R-E-E, let's make it proof," Lujan Grisham said drawing a standing ovation and applause from the audience. "It's been a really long time since I crossed the stage for my diploma at the University of New Mexico, but even though I spelled it out very slowly, I still know what FREE spells and I also know that free college for New Mexico students is the right thing to do."

The program is estimated to cost between $25 to $35 million, according to Lujan Grisham's office. It would combine with the New Mexico Lottery Scholarship and build on existing federal grants to cover students' tuition. Those programs do not currently cover the full cost. Lujan Grisham's office said the state legislature -- where Democrats control both houses -- will need to decide how to fund the rest of the program and will take up the matter in early 2020.

New Mexico state Rep. David Gallegos, who is a Republican on the state House Education Committee. said he does not support the plan because it is not "sustainable."

"Where do we take the money from? Public safety? Public education? I just don't know where we continue the money," he said. "I think the discussion needs to be had that this money would be, if they are graduated and have a job that is located in the state of New Mexico. I'd much rather have that discussion than just give it to anyone for any reason."

State Rep. Rebecca Dow, another Republican who is also on the state House Education Committee, said there should be a work or volunteer element to any potential scholarship.

"I would support targeted scholarships and/or loan repayment for students seeking degrees/certification in (New Mexico's) high demand jobs," Dow told CNN. "I believe there needs to be a work or volunteer commitment to New Mexico to receive any scholarship from our state funds."

The plan would make New Mexico the latest state to join the movement for free college tuition. New York became the first state to make tuition free for two- and four-year colleges in April 2017, and in August, California Gov. Gavin Newsom signed legislation that will provide free tuition for two years of community college to first-time, full-time California students.

College affordability is also a key topic on the 2020 campaign trail. Vermont Sen. Bernie Sanders announced a plan that would make public college tuition free if he were elected president, and in March, Sens. Cory Booker of New Jersey, Kamala Harris of California, and Elizabeth Warren of Massachusetts signed on to co-sponsor Hawaii Democratic Sen. Brian Schatz's Debt-Free College Act, which would establish a matching grant to states that commit to helping students pay for the full cost of attendance -- including tuition, books and other expenses -- without taking out loans.