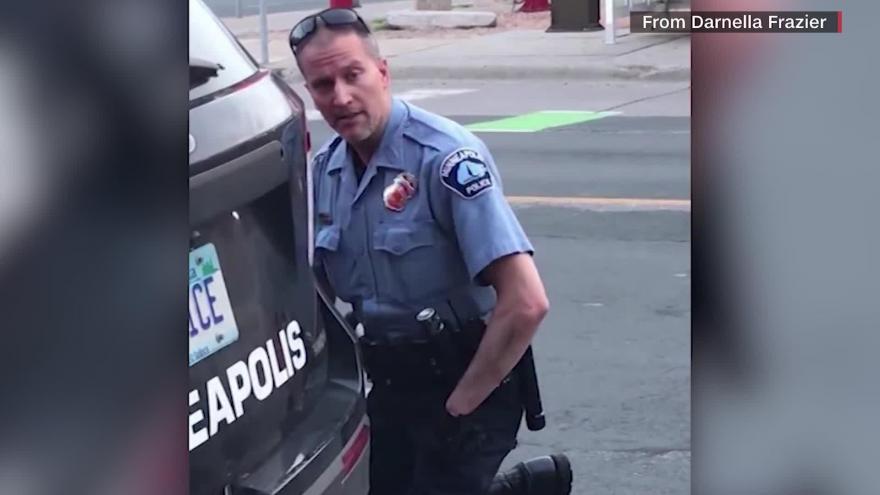 Floyd sobbed as officers initially began pulling him from the vehicle he was in, and at one point officer Derek Chauvin appears to use his knee to lean into pressure applied to Floyd's neck. Floyd's last words, which were not seen in a previously released transcript, were, "I can't breathe."

The two videos viewed by CNN Wednesday begin as Minneapolis police officers Thomas Lane and J. Alexander Kueng are seen responding to a call over a "fake bill" being used at a local market.

Within 36 seconds after speaking with a store employee, the officers are at the door of the car George Floyd was in, yelling, "Put your f**king hands up right now!" after an initial knock with a flashlight. Floyd pleads with officers while sobbing, at one point putting his head on the steering wheel.

Around three minutes into the video, Floyd is forcibly pulled from the car as officers struggle to handcuff him. This was after he pleaded with officers while sobbing as they attempt to walk him to the squad car.

The video seen by CNN shows that a big struggle ensues when officers Lane and Kueng attempt to put Floyd in the squad car. Kueng is physically trying to push Floyd in the car as Lane goes around to the other side of the vehicle and reaches in to try and pull him as Floyd is yelling throughout. This is the first "I can't breathe" we hear from Floyd through what sounded like a gargled breath.

Eventually Floyd falls out on Lane's side and it's at this point the other officers, Thao and Chauvin, show up on video, and then Chauvin, Kueng, and Lane work to restrain Floyd. This is when Floyd falls to the familiar location seen in the cell phone video, and about 11 minutes and 23 seconds into Lane's body camera Chauvin's knee goes on Floyd's neck.

Floyd has been cuffed for nearly 8 minutes now and while already restrained Chauvin appears to increase pressure on Floyd's neck, shifting his torso from an upright position into a curling down motion.

Around 16 minutes into the footage, Floyd's last words are heard, "Man, I can't breathe." Paramedics are seen with Floyd a little over 9 minutes after the knee went on Floyd's neck, and a minute later Floyd's limp, completely motionless body is loaded into the ambulance.

The Minneapolis Police Department has not released video of the incident, saying it as part of an active investigation by the Bureau of Criminal Apprehension into the actions of the officers responding to a call for assistance.

Footage from the police body cameras of Lane and Kueng was filed with the court last week by Lane's attorney as evidence supporting Lane's motion to dismiss the charges against the former officer, but only the written transcripts were made public by the court.

Hennepin County District Judge Peter Cahill, who is presiding over the cases against the four former Minneapolis police officers charged in Floyd's death, made the body camera footage from Lane and Kueng available for public viewing Wednesday.

Cahill so far has declined to allow news organizations to publish the footage. A coalition of media companies, including CNN, filed a motion Monday calling for the immediate release of the two body-worn camera videos.

Floyd died on May 25 after Chauvin knelt on Floyd's neck for nearly eight minutes. Lane and Kueng had helped restrain Floyd and former officer Tou Thao stood nearby.

According to the motion filed by Lane's attorney Earl Gray, Lane asked two times if Floyd should be moved to his side. Chauvin, a training officer and 20-year veteran, told Lane to keep him there until the ambulance arrived, according to the motion. Lane was assured by Chauvin that Floyd was fine and Lane was unable to see any "visible intentional infliction of harm," the motion says.

Gray said in the motion that his client wasn't aware that Chauvin was committing a crime while they were restraining Floyd. The attorney said the decision to restrain Floyd was reasonably justified, according to the motion.